Edward Barber and Jay Osgerby's Double Space installation for BMW features two huge panels positioned end to end, suspended beneath the vaulted ceiling of a gallery inside the V&A. 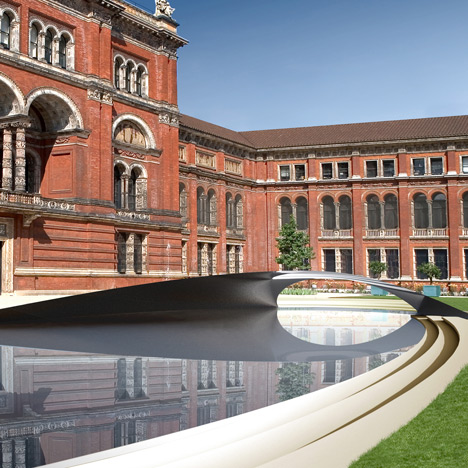 Each piece, constructed in a similar way to an aircraft wing, has one flat side and one convex side.

The Raphael Cartoons are mirrored and distorted in the panels as they rotate above visitors, who can also spot themselves in the shiny surfaces.

"You become completely absorbed by the illusions in the reflectors," Barber told Dezeen. "We designed it for this space, because it's so rich with the floor and the paintings. In a white space it wouldn't be so spectacular."

The two structures pivot around a central horizontal beam in which the mechanism is hidden, moving independently from one another.

Sometimes their rhythms coincide so they swing in unison, while at other points they face in different directions.

Engineered by Arup, the installation was brought into the room in pieces, which were assembled and winched into place then covered with the reflective panels.

"There's been a lot of work behind the scenes," said Barber. "The biggest challenge was getting it through the door"

"Getting it balanced, turning and safe are the things you don't think about when you come into the space and see it."

The Double Space installation will remain in place until 24 October, after which it will travel to other locations yet to be confirmed.

"It should go into another ornate piece of architecture," said Barber. "It's really what it reflects, it's not about the object."

Barber and Osgerby also presented furniture designs for Vitra during the London Design Festival, which continues until 21 September.

The V&A museum is also hosting an aluminium installation by Zaha Hadid that crosses the pool in the John Madejski Garden, and an exhibition of furniture and products created by emerging designers for prominent figures including Terence Conran, Norman Foster and Richard Rogers.

All photography is courtesy of BMW.