An interactive installation in Lisbon aims to encourage pedestrians to wait until it's safe to cross the road by making the traffic lights "dance" using motion capture technology (+ movie).

Car brand Smart teamed up with advertising agency BBDO Germany to create a special pedestrian crossing light in the Portugese capital, featuring a red stick figure that dances to attract the attention of pedestrians who might otherwise walk out into the road.

"We believe that smart ideas can turn the city into a better place," said Mercedes, the German car manufacturer behind the Smart brand. "Like a dancing traffic light that makes people watch and wait rather than walk through the red light. For more safety." 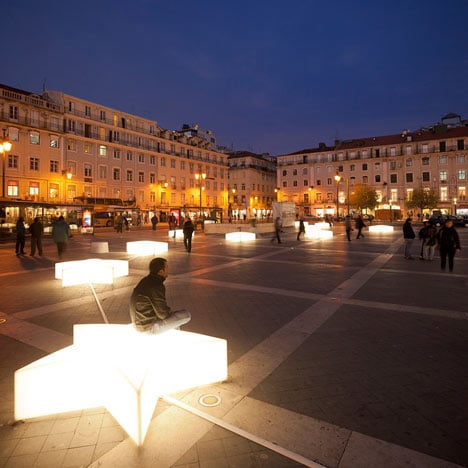 The dancing movements of the red man were created by members of the public who were filmed in a booth set up in a nearby square.

The temporary black structure contained a small dance floor and cameras to capture the movements of each person, which were translated into the movements of the red man in the traffic lights in real time, as well as shown on a screen in front of the participant.

Video screens on either side of the booth showed live reactions to the dancing from the pedestrian crossing.

"Nobody likes to wait," said Smart in the video. "That makes traffic lights the most dangerous spots for pedestrians in the city. But what if we made waiting more entertaining?"

The project was part of a wider marketing campaign by Smart to launch two new versions of its compact city car – the Smart ForTwo and the Smart ForFour – which also included a roadshow around Europe.