With publishers able to produce paper and electronic versions of the same publication, Kroeter believes book design is experiencing a revival. "In a way it's almost like a renaissance, a challenge, and a lot of designers are rising to it." 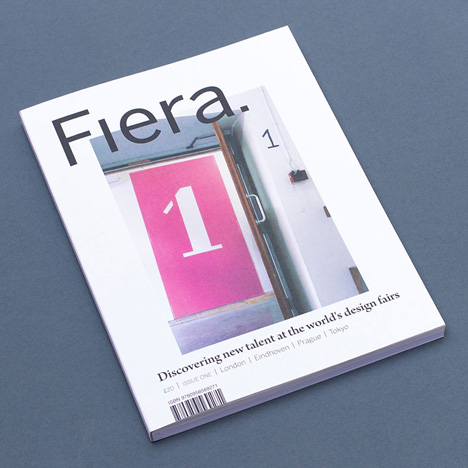 New magazines: "A lasting record of the world of design at a point in time"

"Paper books for designers won't go away," added New York-based Kroeter, who dropped into the Dezeen offices to discuss the issues facing book publishing in the internet age. "I think there's something nice about being able to see an image on paper that is a little bit more robust or impactful or interesting."

Kroeter, who works as a consultant as well as running Designers & Books and sister site Online Book Fair, said that architects and designers are among the most avid book-buying professions because they need them for visual inspiration.

"I'd go from studio to studio, visiting architects, fashion designers, product designers, interior designers, and what I noticed, no matter what sort of design studio I was in, what was common visually as you walked into these places was that books were everywhere," he said.

"And when you think about it it makes a lot of sense because, unlike artists who I suppose can wait until inspiration comes to them, designers need to be creative on demand. I think being surrounded by books and images is one way to do that."

Design publishing has suffered from lack of marketing investment in the past and Amazon can have a detrimental effect on publishers, but Kroeter believes that crowdfunding sites like Kickstarter could help bring about a revival in the industry. "I think that they’re the future, in short," he says. "I think it's a dramatic opportunity."

Read the interview with Kroeter:

Marcus Fairs: What is Designers & Books?

Marcus Fairs: And when you say books do you mean printed books?

Steve Kroeter: Anything. We don't discriminate between paper, pixels or any other format.

Marcus Fairs: We've seen a resurgence in printed magazines recently and apparently printed books are selling more than ever before. So is the internet killing the physical book or is it alive and well?

Steve Kroeter: I think it's alive and well. And with e-books as an option I think it makes it all a bit more of a challenge for book designers to do something a bit more interesting. If you're actually going to devote the resource of paper to it, what do you do that is above and beyond than just an easy way to publish the ideas? So I think in a way it's almost like a renaissance, a challenge, and a lot of designers are rising to it.

Marcus Fairs: You said earlier that designers are among the most avid buyers of books. Why is that?

Steve Kroeter: I’ve done a lot of consulting with designers. I’d go from studio to studio, visiting architects, fashion designers, product designers, interior designers, and what I noticed, no matter what sort of design studio I was in, what was common visually as you walked into these places was that books were everywhere.

And when you think about it it makes a lot of sense because, unlike artists who I suppose can wait until inspiration comes to them, designers need to be creative on demand. There's a timetable, there's a budget, they need to deliver, so they need sources of inspiration, and I think being surrounded by books and images is one way to do that.

That also relates to this notion that paper books for designers won't go away, because I think there's something nice about being able to see an image on paper that is a little bit more robust or impactful or interesting. I think designers like the idea of being able to turn the pages and actually see the quality of the reproduction.

Marcus Fairs: Producing a book is expensive and most don't sell very well. What kind of books are most popular among designers?

Steve Kroeter: Well, from the sort of books that get identified by the designers that we talk with, the great thing is that it’s everything. It kind of reflects the interest level of the designers, so we have some designers whose books are all professionally orientated, so for an architect it might be all architecture books, generally the classic ones.

On the other hand we get a lot of designers who say that they've never read a design book and it's all fiction, poetry and drama. So it's total mix. On our site we list all the books, we have almost 2,000 books that designers have identified, and it's every possible discipline, which is very exciting.

Steve Kroeter: I'm not sure it's only the design world, it's a general publishing thing. If you're going to do it well, a book is a very expensive thing to do; between the editing and the design it can take a long time. By the time a publisher gets done with all that they've often run out of money, so there's very little gas in the engine to actually provide marketing budgets as well.

On the other hand I think the exciting part is that the design book niche is pretty focused. For the most part, when you've published a book on architecture, you know who the audience is going to be. They're architects and they tend to buy a lot of architecture books.

Marcus Fairs: It's now easy to self-publish a book thanks to print-on-demand services like Blurb and other technologies. Is there a future for publishing companies?

Steve Kroeter: In spite of all the wonderful things that are happening on the web that are making it easier to self-publish, we still think that publishers are critical and central to the publication process, they perform valuable functions.

We think that it's a big opportunity for publishers to connect directly with their audiences. That's not a new idea, that actually goes back to the time of Gutenberg, when they would print upstairs and sell downstairs, and they knew exactly how many copies to print because they knew how many people were going to buy a book.

Now with the web you can do that exact same thing, whereas not that long ago you had to rely on intermediaries. Now that you don't have to do that the publisher can be in touch with everybody that's going to buy the book. Third parties are less and less relevant. That I think is a gigantic opportunity that hasn't been fully realised.

Marcus Fairs: What about Amazon? They sell a lot of books but they often discount them very heavily, eating into the publisher’s margin.

Steve Kroeter: Amazon clearly plays a very important part in the book world today and in the design publishing world as well. One of the challenges is that most of the research that we've seen is that people don't necessarily discover books on Amazon; they buy them there because they know they can get them very inexpensively, and that they're fulfilled extraordinarily efficiently.

So you get to the point where people discover books in one place and then they buy them in a different place, and that's a challenge, because who would possibly spend money to help people discover books if you're not going to get a chance to reap the reward of it? So I think there's gotta be some evolution of that. We'll see where it goes. I don't think we know for sure yet.

Marcus Fairs: What do you think of crowdfunding sites like Kickstarter? Will they play an important role in book publishing?

Steve Kroeter: I think that they’re the future, in short. I think it's a dramatic opportunity. We've seen a number of cases where publishers or even authors go on Kickstarter, ask for $30,000 or $40,000 and get $100,000 to fund their ideas because they can connect directly with the audience. It's not just for those that are interested in self-publishing; there are several instances where the project has included a publisher.

So I think it's a true opportunity. People want to participate. If people find a project that they like, that can be as interesting and compelling for books as it can for product designs, films or whatever. So I think that it's going to be the way of the future; I don't think that's too strong a thing to say.

You can almost envision a situation where Kickstarter is the first print run. After that has sold out the second print run could perhaps be to select bookstores where there's a particular connection with the book and the audience of the bookstore, and then the third print run could be kind of all others.

Marcus Fairs: Why did you launch the Online Book Fair?

Steve Kroeter: When we launched the site in 2011 we primarily focused on recommended books. At some point we started hearing from people that they would appreciate if we would go beyond that and help people purchase the books that we recommended. What we didn't need to do was do things that others do much better, like sell them and have inventory, but when we looked at it, we realised that we basically knew all the different constituencies and communities that we needed to know to put together a book fair.

So in 2012 we did an offline book fair; we rented an exhibition hall in New York, we rented two auditoriums adjacent for book programming, we had 45 publishers show up over a weekend in October, and as far as we know that was the first time the design book community had the opportunity to come together like that.

We had several thousand people who showed up; it was a successful weekend. We concluded from that if that was a good idea two days a year, maybe it would be an even better idea if it happened 65 days a year. So this past October we launched an online version of the fair. We have about 17 publishers who are a part of it now and four rare and out-of-print dealers, and we hope to expand that.