Ornate patterns have been carved into the wooden screens that surround this lakeside villa in western Austria, designed by Viennese architect Alexander Diem (+ slideshow).

Named Villa by the Lake, the house provides a family home in a rural setting. 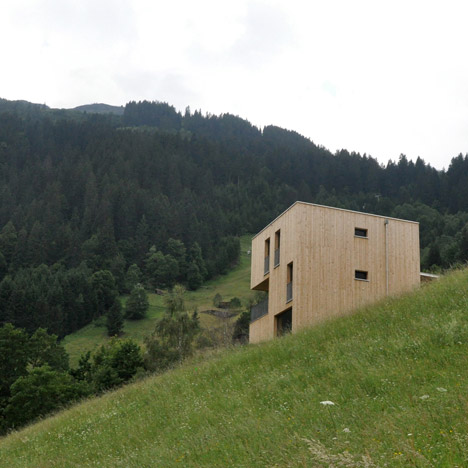 Privacy was seen as the most important aspect, so Alexander Diem designed a residence that can be screened from prying eyes without preventing light from entering.

The house is layered so that the most private spaces are at the centre. Terraces wrap around the perimeter, but can be concealed behind the folding perforated shutters.

"Privacy is the central theme of this single-family home," said Diem. "In a time which supposedly knows no privacy any more, the built volume celebrates the transition from public to private spaces."

"The farther one gets into the villa by the lake, the more private and gentle the building appears," he added.

The detailed fretwork surrounds all four elevations. It references traditional building techniques from the Alpine region, but was also intended to pay tribute to harvest, through use of symbols based on fruit and vegetables.

Hinges allow shutters to concertina in sections. When open they reveal the houses' glazed inner facade, but when closed they cast shadows that the architect likens to "exotic wallpapers".

Internally the house is loosely divided up over four storeys. One level sits below ground, while the first floor functions as a mezzanine to the ground floor below.

Diem designed the proportions of each room based on the amount they're used. This allowed the main living room to occupy a generous space with five-metre-high ceilings, while the stairwell, considered a "subordinate area" is much more confined.

Despite the building's rectilinear exterior, rooms inside the house have rounded edges, expected to create a sense of security and homeliness.

A sizeable garage branches out from one side of the property, with a white-rendered surface that extends to the houses's recessed entrance – an elaborate door designed by artist Plamen Dejanof to reference historic country houses.

Wooden shingles clad the staircase core, while other features include an artwork by Nick Oberthaler integrated in the terrace floor.

Photography is by Andreas Balon.