Firm Architekten has extended a gabled farmhouse in Bezau, Austria, with a matching structure clad in timber louvres that double as shutters.

Raised on a small white-plastered podium, House Wünster faces out towards dramatic views of mountains.

The House Wünster extension sits alongside the original shingle-walled farmhouse building, united by a pitched roof that extends across them both.

In a contemporary take on the traditional shutters of the farmhouse, the upper level of the extension features panels of timber louvres that can swing upwards.

These shutters completely open the bedrooms to sunlight and views, while shading them from the direct southern sunlight.

"The shutters filter the light and create breathtaking panoramic views of the mountains," said the architecture studio.

"The balcony becomes an extension of the interior".

When closed, the only openings in the south facade are a large set of windows in the combined living, kitchen and dining area. A large window to the west also brings evening light into the dining area.

Occupying the site of a former stable that abutted the original house, Firm Architekten's design continues the roofline and pedestal of the existing building, while clearly defining the facade of the contemporary addition. 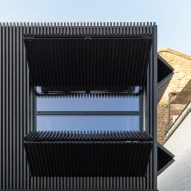 "Formally, the existing and the new building should appear as one building," said the architecture studio.

"This is done with the continuous roof and an immediate pedestal."

As the roof makes the old and new parts of the building appear whole, the two halves are delineated by their distinct facades.

They function as separate units, each with its own entrance and separated by an interior wall.

At the entrance of the extension, a three-storey staircase connects all levels of the building.

Bedrooms occupy the top floor, with living and dining below. There is also a sauna at the lowest level, opening onto a small outdoor area sheltered by the hillside.

The interior finishes are exposed concrete and silver fir, creating generous, light-filled spaces that all maximise views out towards the mountains.