Paris-based Diego Delgado-Elias recently set up his own architecture studio after ten years spent at other international architecture firms. This prompted him to explore different media, within an architectural theme. 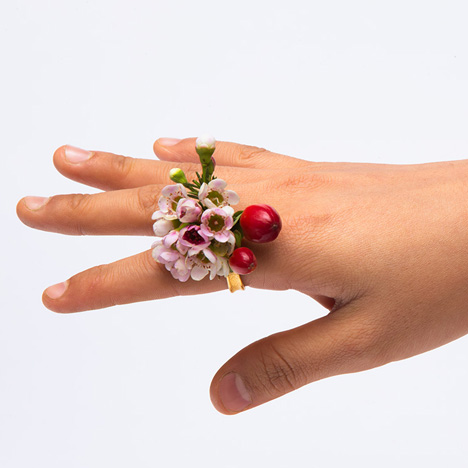 "I've always been interested in making jewellery but I wanted it to be something that related to me as an architect, in a practical way," Delgado-Elias told Dezeen. "The collection came about as a result of researching the life of an architect and their daily routines."

The limited edition Architects' Jewellery collection is made by Paris atelier Bermudes, which also creates jewellery for the likes of Piaget and Cartier.

Delgado-Elias creates a sketch and then a 3D model, which he provides to Bermudes. The French firm then 3D-prints, moulds, finishes and laser engraves the final pieces.

"I did a few different tests - I started having them made in Peru to promote work in developing countries, but handmade was not giving me the shape, angles and clean geometry that I wanted to achieve," said the designer.

"So I got in contact with Bermudes. They have the right equipment to make them as I want them," he said.

Despite their reduced size, each piece retains the functionality of the original.

"You can wear them and use them to take measurements, draw, compare scales in plans," said Delgado-Elias. "I wanted to make them functional and respect the scale, not just make small mimics of real-size objects."

"I don't think they are for everyone, since they are pretty big and made in solid silver. That is one of the reasons I had them made in limited numbered series, to add a 'collection piece' feeling to the collection."

Diego Delgado-Elias was born in Peru and graduated from l'Ecole Especiale d'Architecture in Paris. He has worked in Peru, Miami, and Paris and his studio now encompasses architecture, interior design, art and jewellery.

Photography is by Damian Noszkowicz, unless otherwise specified.