Designers Lucy.D have created a range of cakes for one of Vienna’s most famous coffee houses in an attempt to bring Austrian baking into the 21st century (+ slideshow + interview).

The female design duo created Landtmann Kollektion for Café Landtmann, one of Vienna's grandest cake-and-coffee establishments, after its head chef noticed that traditional cakes were going out of favour. 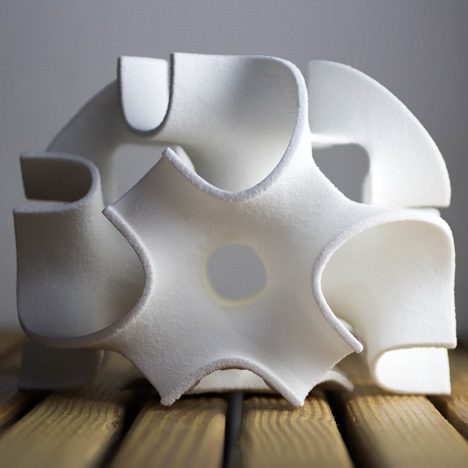 The Sugar Lab by Kyle and Liz von Hasseln

"He saw that the kitsch, old-fashioned cakes he had been making since the 70s, with the marzipan roses on top and everything, are not bought any more," said Barbara Ambrosz of Lucy.D.

Ambrosz added that the fashion for cup cakes and celebration cakes that started in the USA and the UK was making Viennese cakes look outdated.

"We sent the marzipan figures into retirement!" said Ambrosz.

Lucy.D's new range of cakes went on sale this week at the cafe, which is also holding an exhibition about the project as part of Vienna Design Week.

Together with her partner Karin Santorso, Ambrosz created a modular range of patterns, colourways and shapes that can be specified by the customer when ordering a cake for a special occasion like a birthday or a wedding.

They introduced new ways of personalising cakes, including greetings printed onto paper-thin sheets of sugar with an inkjet printer modified to work with food dye, and origami decorations that can be kept once the cake has been eaten.

They also created a range of silicone moulds that can be used to create delicate filigree decorations and borders from sugar paste and adapted airbrushes to give cakes colourful gradients.

A range of seasonal patterns can be applied to the cakes’ toppings via specially created acrylic forms resembling printers' blocks.

Café Landtmann, located on Vienna’s Ringstraße next to the Burgtheater, was established in 1873 and in its heyday was frequented by famous patrons including Sigmund Freud and Gustav Mahler.

Lucy.D's new range of cakes update the appearance of traditional cake recipes such as the classic sachertorte. Customers who order cakes for special occasions can specify the colour, pattern and decoration, and the cafe's pâtissiers will make the cake to order.

The designers also created a system of pared-down stands for displaying the cakes, with demountable platters that allow waiters to distribute pieces of cake at weddings or other events.

The white-painted steel stands have wheels hidden in their bases so they can easily be moved without the risk of damaging the cakes.

An exhibition explaining the cakes and how they were developed is at Café Landtmann, Universitätsring 4, 1010 Vienna until 5 October 2014 as part of Vienna Design Week.

Read on for the transcript of the interview with Ambrosz:

Marcus Fairs: Tell me about yourself.

Barbara Ambrosz: My name is Barbara Ambrosz. I'm from Lucy.D design studio in Vienna. I work with my partner Karin Santorso and we've designed cakes for Landtmann, which is a famous old classic Viennese coffee house next to the state theatre.

Marcus Fairs: Tell me about the cakes.

Barbara Ambrosz: The chef of Cafe Landtmann asked us to design new cakes for celebration occasions. The idea behind it was that he saw that the kitsch, old-fashioned cakes he had been making since the 70s, with the marzipan roses on top and everything, are not bought anymore. There is a big new influence from America and also from Great Britain for these celebration cakes.

Barbara Ambrosz: Birthday cakes, wedding cakes, mothers day, Valentine's day and all the different occasions you celebrate during the year. This was the target for Landtmann.

Marcus Fairs: So the Viennese cake industry was stuck in the past?

Barbara Ambrosz: Somehow yes. And now we sent the marzipan figures into retirement!

Marcus Fairs: Ok, so tell us what you've done.

Barbara Ambrosz: We designed different patterns and means of decorating the cakes. We made a set of colour palettes. We also used origami instead of the marzipan figures. We have a very thin layer of sugar decoration, which is now called the Landtmann Blumer [flower], which is put into a silicone mould and then dried.

Then we have this very thin sugar layer which can be printed on, where you can put your personal name or sentence. It's done with a normal computer printer but with food dye. And we also worked with water jets to cut the cakes, because all the cakes are produced in very large dimensions and in order to get the dimensions we want to have they are cut precisely with a water jet.

Marcus Fairs: Are water jets a new technology for cakes or do they use that already?

Barbara Ambrosz: It's a technology that is already used. We spent a lot of time in the patisserie and we saw what they are using. We also used an airbrush to paint gradients onto the cakes. So we're using things that are already used but using them in a new way.

Marcus Fairs: Is it a conceptual project or will the cakes be sold?

Barbara Ambrosz: They go on sale this week! The most important thing for Landtmann is that we don't produce something that is not sellable or something they can't make. So we are using their production processes but we have reassembled and reinvented everything.

Barbara Ambrosz: The idea of Landtmann was to take their classic cakes and redesign them. But we did design one cake, called the open top cake, where we left the sugar topping off so you can see the inside.

Marcus Fairs: What does the chef think of your designs?

Barbara Ambrosz: He loves them. The project would not really work out if the chef was not really behind it.

Photography is by Petra Rautenstrauch at Kollektiv Fischka