A team of designers are presenting a concept for a modular engine that could fit into any vehicle at the Bio 50 biennial of design in Ljubljana (+ slideshow).

Gaspard Tiné-Berès and Tristan Kopp of Re-do Studio worked with designers Antoine Monnet and Ricardo Carneiro, imagining a near-future post-apocalyptic scenario in which man has to be resourceful with industrial objects. 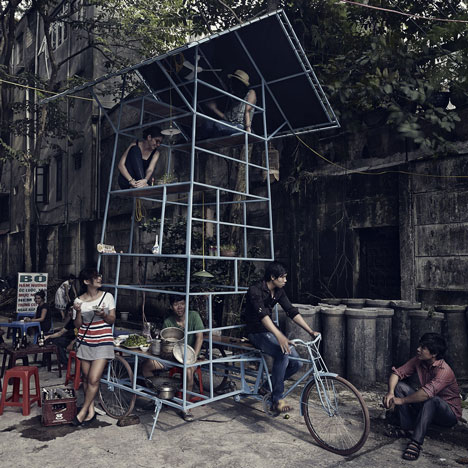 Ta đi Ôtô mini-skyscraper on a tricycle by Bureau A

With this in mind, the team created an engine that can be removed and interchanged between different vehicles.

Developed with Slovenian motorcycle company Tomos, the engine could be hacked onto a range of existing modes of transport and tools, used on one after another as the user searches the landscape.

"In this reality, the modular Tomos engine developed by the Engine Block group becomes an enabler of survival, an industrial construct for a post-industrial age," said Vera Sacchetti, curatorial advisor for Bio 50.

"It's a manifest that states that humans will always find ways to deal with industrial goods and waste, that planned obsolescence or design made to be not hackable or hard to understand is a danger for the system of object and the creativity of makers," Tiné-Berès told Dezeen.

"No matter how much money is spent making something inaccessible, people will always find ways to hack it."

Engine Blocks is one of eleven possible futures of design devised for Bio 50 – the 24th edition of Slovenia's biennial design event.

A total 120 designers in 11 teams were asked to participate using different themes, including Nanotourism, Affordable Living and Observing Space, during the six months leading up to the festival.

The results are on display in an exhibition titled 3, 2, 1... Test, split between the Slovenian capital's Museum of Architecture and Design, Jakopič Gallery and Museum of Modern Art venues, until 7 December.

The engine block itself is presented in a glass case, surrounded by hacked vehicles and motorised tools including a motorcycle, scooter, concrete mixer and boat.

"We would love Honda to give us some of their GX engines to do it again with more machines and more fun!" Tiné-Berès said.

Here's the text by Vera Sacchetti that accompanies the project:

Under the scorching sun of a spartan landscape – in an undefined location echoing both the wide American south and the hills of Central Europe – a man sets off from his workshop into the woods, taking into his hands a small, modular engine that allows him to ride a motorbike, a boat, and to activate a number of tools which to work with. He is alone, but he is resourceful. The world around him seems to be fertile with industrial rejects, and nature is all- encompassing.

The realities of a post-industrial age in the Western world became more tangible after the 2008 economic crisis, alongside the downsizing and displacement of industrial production to other parts of the world. Triggered by similar constraints observed directly around them with their partner company Tomos, the Engine Block group chose to pursue a speculative, dystopian path following an initial period of intense production.

Their scenario is the not so distant-future, a Western wasteland that, despite being more often present in sci-fi, is today a part of our collective unconscious. More pragmatic than Mad Max, the protagonist of this vision is a resourceful homo faber – a post-apocalyptic maker. In this reality, the modular Tomos engine developed by the Engine Block group becomes an enabler of survival, an industrial construct for a post-industrial age.