News: Zaha Hadid has unveiled designs for a new Cambodian institution made up of five interwoven wooden towers to house the largest archive of genocide-related documents in Southeast Asia (+ movie).

The London-based architect – who is best known for utilising modern materials such as concrete, fibreglass and resin – chose timber for the tapered wooden structures of the Sleuk Rith Institute, a building conceived by human rights activist Youk Chhang for the Cambodian capital Phnom Penh. 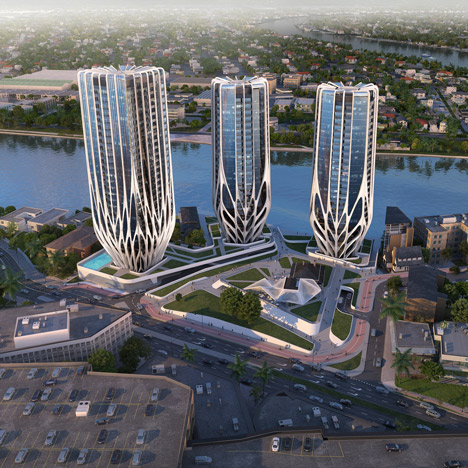 The facility will hold the archive of the Documentation Centre of Cambodia, a non-profit organisation that records the atrocities carried out during the Khmer Rouge period in the 1970s, commonly known as the Cambodian Holocaust.

Chhang, who was imprisoned under the regime at the age of 15, is executive director of the organisation. He chose Zaha Hadid to design a new building that he hopes will provide a departure from the stereotypical approach to memorial architecture.

"We were keen to create a forward-looking institution that deviates from the distress-invoking, quasi-industrial, harshness of most existing genocide memorial models," he said.

"The best memorials are not objects we visit once, contemplate, and file away. The best memorials evoke reflection and commemoration, but are also living, dynamic public places that engage with all generations in the community."

Comprising five towers that range between three and eight storeys, the Sleuk Rith Institute will accommodate a museum, a library and archive, a graduate school focusing on genocide, conflicts and human rights studies, a research centre, a media centre, and an auditorium that can be used by the local community.

Hadid's design incorporates geometric forms derived from the Angkor Wat temple and other Cambodian landmarks, creating an "an intricate spatial composition" of overlapping internal and external spaces centred around a main atrium.

"Our hope is the Sleuk Rith Institute and its Memorial Park can have a truly transformative effect, bringing new life and a bright future to a site that holds traces of the great tragedies of the past," said Hadid. "An inviting place where reflection, interaction and connectivity are not only its spatial expression, but also embedded within its covenant to the people of Cambodia."

Located in the former grounds of the Boeung Trabek High School, which was used as a re-education camp during the Khmer Rouge regime, the building will be raised up over reflecting pools, protecting it from seasonal flooding.

The building's tapered form will offer shade to the lower floors, while louvres will provide sun shading to the upper levels. These shades will also be subtly varied to suit the needs of each building.

The complex has already been granted planning approval and is due to start on site early next year. It will be surrounded by a 68,000-square-metre park including sports grounds, vegetable gardens, orchards and a contemporary Cambodian sculpture park.