News: the city of Almere in the Netherlands has selected a small curvy chapel designed by architect René van Zuuk to be constructed over the surface of the Weerwater lake.

The Weerwater Chapel was one of five winners in a competition to develop architectural interventions in and around the lake, which forms the heart of the 36-year-old Dutch city on the outskirts of Amsterdam. 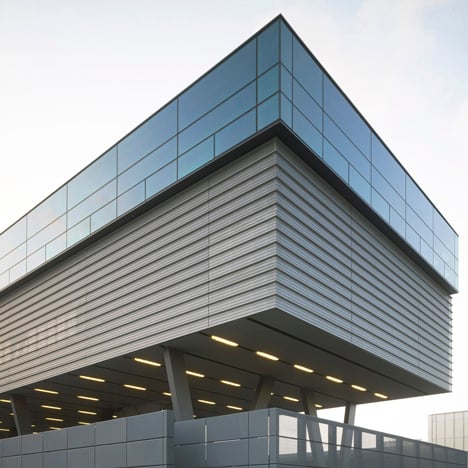 René van Zuuk, who lives in Almere in a house he designed, proposed a curved wooden chapel that sits above the water's surface and is accessed via an extension to a jetty that already extends out from the shoreline.

According to Van Zuuk, the chapel could host religious activities for a variety of different cultures. "This is a function that is part of every full-grown city but not yet available in the centre of Almere," he explained

"It is a place close to the city hall for the people of Almere to be able to get married but also close to the hospital where people can mourn. It is a location for the Christmas nativity scene in December, and a quiet place for reflection and small services throughout the rest of the year," he said.

The chapel will be constructed from foam, using profiles cut with a CNC machine. External surfaces will be covered with zinc, while the interior will be lined with plywood.

Van Zuuk and colleague Dirk de Groot developed the shape using a small CNC foam cutter of their own.

A petal-shaped window will form the front facade and a narrow strip of glazing will extend across the roof.

"It should be an eco-friendly sustainable architectural object that fits in the city centre and strong enough to be able to create its own position in the ensemble," added Van Zuuk.

The other competition winners that will be installed include gardens, lighting, an activity zone and a bridge.

Two years ago the city of Almere was selected to host the 2022 World Horticultural Expo, and Rotterdam studio MVRDV are currently working up plans to build a 45-hectare city centre extension over the Weerwater.