News: architects have been selected for two of three new "iconic" train stations in Paris that will be built as part of the Grand Paris Express ring-route rail project. 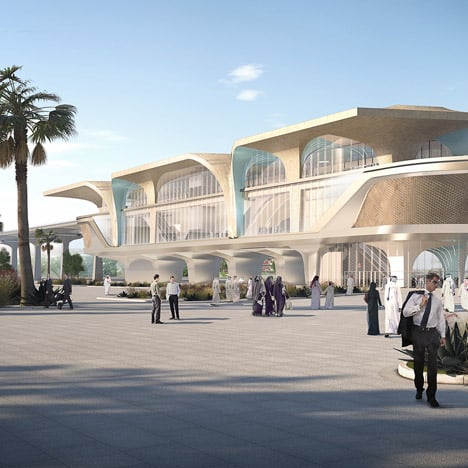 The architects were selected via competition, with a third winner still to be announced for the Saint-Denis Playel station later this month.

The Grand Paris Express project is run by public agency Société du Grand Paris and involves building a new, fully automated metro line to form a ring-route around the perimeter of the city, with three offshoots to serve developing neighbourhoods.

€300 million was invested in the first 33 kilometres of the network in 2013. The aim is to build 205 kilometres of line by 2030, connecting the network to airports and major TGV high-speed train stations that connect Paris to the rest of France. A total of 72 new stations will be built as part of the project.

A number of the stations have been designated as "iconic" projects, with international architecture competitions launched for three of these. Firms including Foster + Partners and UNStudio were shortlisted for the two stations that have now been won by Miralles Tagliabue (EMBT) and Bordas + Peiro, and Elizabeth de Portzamparc.

EMBT's 4,800-square-metre station will be located on the border of the neighbourhoods of Clichy-sous-bois and Montfermeil – an area that was at the centre of violent riots in 2005.

"A new station of the Grand Paris Express will be a symbol of the change for these areas," said a statement from Miralles Tagliabue, the firm now led by Benedetta Tagliabue following the death of her partner Enric Miralles in 2000.

"This new station will bring Paris to Clichy-sous-bois and to Montfermeil and will include them into the Grand Paris project."

The scheme includes a new public square as well as an underground station sheltered underneath a pergola roof, with natural light brought into the space using a large skylight. Long, zig-zagging escalators provide access to the ticket hall and platforms.

"Our approach is looking for the maximum integration of the metro station's access into the urban context," explained the architects. "The access is made through a slow slope with stairs that invites the people coming out of the station to participate on the square."

"We would like to transform this grey and abandoned place into a vivid and colourful square, which inspires joy and optimism," said the architects. "This is why we based the motifs of the pavement, the shapes and the colours of the roof on the tissues, decorative motives and colours from Africa."

De Portzamparc's 6,800-square-metre station will be the connection point for travellers to and from Le Bourget airport.

The design is formed from a series of rectangular volumes. A skylight brings natural light to the platforms below ground floor level, which are accessed via escalators.

"The train station based on the principle 'total flex' provides more flexibility to the future underground platforms and for the future other transport networks," said a statement from Elizabeth de Portzamparc.

"Thanks to the used materials (wood, warm colours) and a strong presence of nature, the station becomes a place to 'live', a combination of user-friendly and sensorial atmosphere."

The main flow through the space will be centred around two "courts" or concourses over two levels.

Due to client restrictions, no images have been released yet of the exterior design but the firm said it would include a "totem" to increase the visibility of the station, which would turn act as "the symbolic and landmark identity of the Parisian metropolis."