This cape covered in thousands of acupuncture needles was developed by Royal College of Art graduate Izzy Parker to challenge ideas about personal boundaries and human interaction (+ movie).

The Tactile Treatment garment was designed by Izzy Parker as part of her Intimacy Series of wearable pieces, which aims to provoke questions about interaction between individuals. 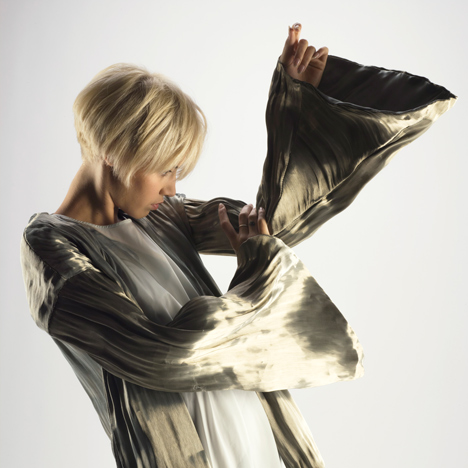 "Tactile Treatment explores our fluctuating levels of patience, trust and mutual understanding as well as our interpretation of personal boundaries when we meet someone for the first time," said Parker.

The garment featured in her new film is made from 11,570 steel and copper needles, which are usually inserted into the skin at various pressure points over the body during acupuncture treatment.

The needles are hand woven into the textile base as a flat piece, a process that took Parker over 300 hours.

Draped over the shoulders, the spikes open out like when a hedgehog curls into a ball. When the wearer moves, the needles reflect the light as they quiver and ripple.

In the movie by director Shaun Spark, the bristles are captured in macro detail as the cape is worn and passed between two dancers.

One character strokes the shimmering metal elements and pricks his finger on one of the needles.

The wearers adopt a series of positions to show how the garment responds to movement.

The film and a range of new jewellery are on show at the exhibition Undercurrent exhibition, organised by the Moving On Collective at London's The Vaults Gallery, which continues until 18 October 2014.