News: Chinese architect Li Xiaodong has become the first recipient of the Moriyama Prize – a new award launched by the Royal Architectural Institute of Canada and architect Raymond Moriyama to rival the Pritzker and Stirling prizes.

Launched earlier this year, the CAD$100,000 (£55,000) Moriyama Prize is one of the highest value award in architecture and one of few that is awarded specifically to a building that is already in use, rather than a new project or body of work.

Li Xiaodong was named the inaugural winner at a prize ceremony on Saturday at the Fumihiko Maki-designed Aga Khan Museum in Toronto for his Liyuan Library project, which completed in 2011. 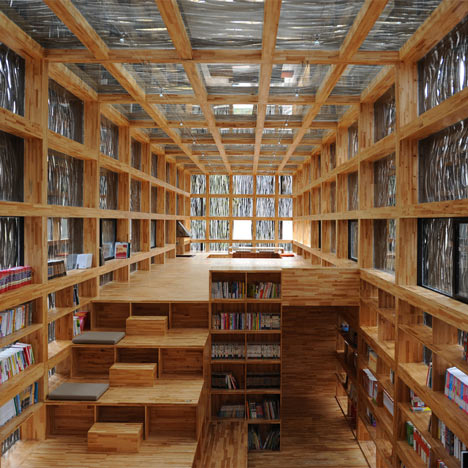 "The Moriyama RAIC International Prize is awarded to a building that is judged to be transformative, inspired as well as inspiring, and emblematic of the human values of respect and inclusiveness," said the organisers of the award in a statement.

"In the two and a half years of its operation, the Liyuan Library has experienced unexpected levels of use and appreciation," it said. "A new bus stop has opened close by to accommodate the frequent visits by thousands of people, including local villagers, tourists from the Beijing urban area, and many international visitors as well."

Located in a small village on the outskirts of Beijing, the single-storey Liyuan Library is wrapped in a glazed shell covered in sticks of firewood. The frame of the building is made from chunky timber beams. Inside, stepped platforms integrate low level shelves and provide seating areas for readers.

In an interview with Dezeen, Xiaodong explained that the building was designed to attract tourism to the village as well as provide a public service and was a test in combining architecture and technology seamlessly.

"Every project of mine is actually a test, an experimental effort, in how we can engage some different issues and how do we address those issues... in this case, how I can test our understanding about technology," he told Dezeen. "Normally we understand technology as a separate entity from architecture."

Although the building looks "untechnologically expressive," it features an integrated cooling system that draws cold air from the surface of a lake in summer and pulls it up through the building, explained Xiaodong, and 99 per cent of the materials used in the project can be recycled.

The Library "is a lovely object in a dramatic landscape, a wondrous thing to use and be in," said a statement from the six-strong prize jury, which included British architect Edward Cullinan and Royal Architectural Institute of Canada gold medallists Bing Thom and Patricia Patkau.

Also on the jury were Canada based architect Brian MacKay-Lyons, Maxime-Alexis Frappier, winner of the Royal Architectural Institute of Canada's 2013 Young Architect Award, and architect and chancellor of the RAIC College of Fellows Barry Johns.

"We need more of these types of perhaps modest, yet powerful buildings, which make architecture from a deep understanding of people, culture, context, site, materiality and light," said Johns.

Three CAD$5,000 scholarships were also awarded to students at Canadian universities who submitted essays on the question: Why do I want to be an architect?