Dezeen and MINI Frontiers: architecture education is failing to understand how technology is changing our cities says Keiichi Matsuda, who foresees the profession “splitting into two parts” thanks to digital advances (+ movie).

The ubiquity of laptops and smartphones means the old architectural maxim that form follows function “doesn’t exist any more,” Matsuda adds, since building users now carry functionality with them as they move around the city.

“We can bring our laptop or our phone into a space and make that space whatever we want,” he argues. “So how can you design a form around a function that is not set?”

This is fundamentally changing the requirements of buildings, Matsuda believes, and will ultimately cause ruptures in the architecture profession.

"I see the architectural profession splitting into two parts," he says. "On the one side you'll have the people that design the physical support structure of the building. On the other you'll have people who are making the experience of a building – the way that we perceive it in the virtual layer. They'll be much closer to game designers or filmmakers."

Augmented reality is a way of superimposing digital information over the real world. The technology currently works with smart phones, tablets or headsets such as Google Glass, but could one day be embedded in something as small as a contact lens. 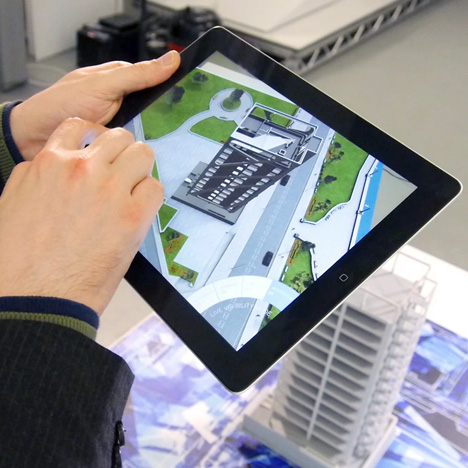 London-based designer Matsuda originally studied architecture, but became disillusioned with the profession and now works in a variety of media to explore how new technologies such as augmented reality affect our daily lives.

"I find it incredibly frustrating in architectural education that there's no real drive to understand the way that technology is changing our cities," he says.

For the Dezeen and MINI Frontiers exhibition he produced a film looking at how ubiquitous augmented reality could transform the way we navigate cities, with signage and directions superimposed onto the streets digitally.