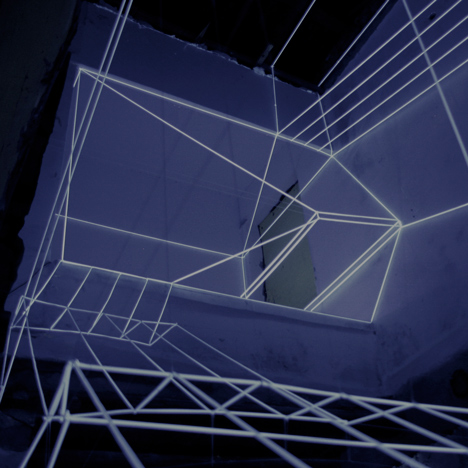 "No one can do anything with [the structures] because no one wants to live in a building that's so old," said studio co-founder James Shen. "It's cold, there's no bathroom and so on."

Shen also explained that developers are unwilling to invest in the buildings, which are typically arranged around courtyards, because small sections of them are still occupied by local residents.

The architects developed prefabricated panels that include the structure, insulation, interior and exterior surfaces, all moulded in one piece.

These can be cut and arranged to fit in between the existing structural features of the hutong houses, and can easily be disassembled and removed when no longer required.

"A big part of the project is keeping the existing structure as it is," Shen said. "It's a very complicated process to do anything here. We designed the system so it can be taken apart."

To assemble the simple structures, an allen key is used to turn metal hooks embedded into the edges of the panels so they clasp on to the adjacent piece. Door and window elements can also be installed in the same way.

"There's no screws or nails, it just locks together with hooks that pull the pieces together," said Shen. "It can be put together by anyone".

Each panel, manufactured off-site at a factory in Guangzhou, is designed to be small enough to be transported through the neighbourhoods' narrow alleyways and light enough to be carried by one or two people.

"We had to be conscious of the size, because if it's too large we can't navigate it through the hutongs," Shen explained.

To demonstrate the project, the studio has revamped the buildings around a courtyard in Beijing's Dashilar hutong district, which originally housed 12 families but is now home to just two. "The biggest issue is the locals around us, we had to get their support for this," said Shen.

On one side, a long building is converted into a temporary office space while a small studio apartment is inserted into the structure on the other side. The new rooms took just two days to assemble.

"This solution was created to ensure that [existing residents] wouldn't be so disturbed by very long construction processes," Shen said. "It's a very light way of inserting a modern building into here."

The external aluminium finish contrasts with the traditional brick and wood elements of the original architecture.

The front of the office sits behind the facade of the old building, while a section of the apartment sits out past the roofline into the courtyard. The architects also used timber decking to level the surface between the two buildings.

Inside both spaces, wood veneer covers the raised floors and the flat ceilings, which also feature windows to provide ventilation and views of the pitched roofs above.

The apartment has space for a double bed, a small table and seating. An adjacent tiled space holds a plumbed bathroom, a feature not commonly found in courtyard houses.

This Courtyard House Plugin is the first application of People's Architecture Office's system, and is one of a series of pilot projects launched to help regenerate the Dashilar hutong – one of many Beijing neighbourhoods made up of narrow alleys and courtyard homes.

Many other similar neighbourhoods have been destroyed to make way for new high-rise development, so this initiative championed by Beijing Design Week aims to find solutions to the regenerating this particular area – just south of Tiananmen Square.