The domed and curving rooftops of this science museum in Komatsu, Japan, are covered in grass, creating a series of rolling hills that visitors can clamber across (+ slideshow).

Designed by Mari Ito of Tokyo studio Urban Architecture Office (UAo), whose past projects include a house with a kitchen worktop that doubles up as a dining room, Science Hills Komatsu is a museum, communications centre and archive. 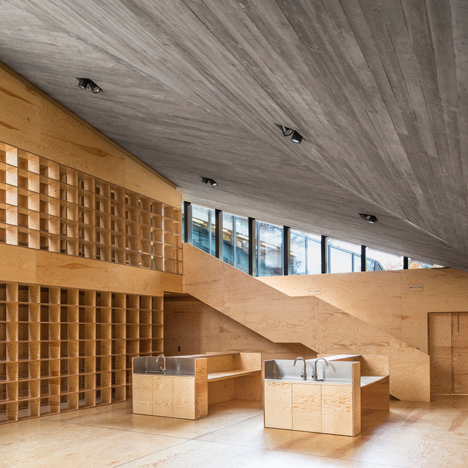 The building is located on the site of a former factory in the city that lent its name to one of the world's largest manufacturers of mining and construction equipment, so the brief was to create a building that could spark a renewed public interest in science and industry.

Ito's concept was to integrate architecture and landscape, creating a building that also serves as a public park. The curved profiles of the various spaces appear as four waves, framing courtyards, pathways and rooftop lawns.

An auditorium is contained within the dome in the north-west corner of the site, while the main exhibition space is located beneath one of the largest waves.

"People can stroll freely inside and outside of the broad waves and view exhibits from many aspects," said Ito. "The rooftop curve serves as a sweeping canopy controlling light and also drains rain water into a reservoir for planting irrigation."

The rooftop greenery provides additional insulation to the interiors. "The slab sweeping up from the ground and then forming waves adds a natural and sensitive aspect to the design," added Ito.

At night, the space is transformed by light show, as hundreds of LEDs fitted with wind sensors create a colourful interpretation of the current air movements.

"The entire building is intending to be in harmony with science and to encourage the visitor's various scientific discoveries in practice," said the architect.

Science Hills Komatsu also accommodates a science education centre, a business incubator and an area for industrial businesses to promote themselves.

The complex was largely constructed from reinforced concrete, which is left exposed internally and externally. Industrial-looking steel columns offer additional support to the curving roof.