London Design Festival 2014: director Deborah Spencer and creative director Michael Sodeau introduce their highlights from designjunction 2014 in this movie produced by Dezeen for the show.

"The concept was to treat it almost like a cityscape," Sodeau explains. "On the ground floor we have a hustly-bustly Camden Market-type feel. The first floor is a little bit more meandering – sort of like Oxford Street, if you like. On the second floor we have wider aisles with almost an avenue feel."

New this year was a dedicated lighting show in the basement called lightjunction.

"Over the last few years we've seen a growth in the lighting industry," Spencer explains. "What we've done this year is open up the basement for a dedicated show."

For the first time the ground floor featured a large exhibition space, which hosted our Dezeen and MINI Frontiers showcase about the future of travel. 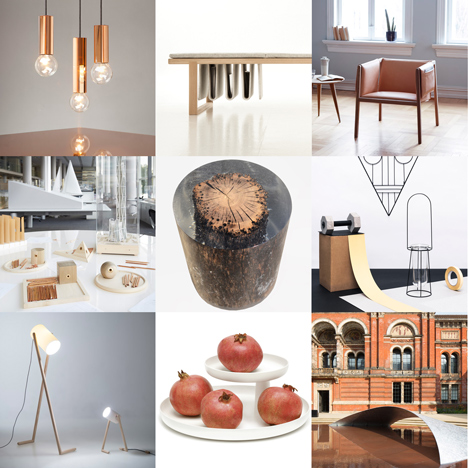 "You can see Ventura London as the baby brother of our bigger Ventura Lambrate project," explains Lisanne Fransen of Ventura Projects. "We have lighting, furniture etcetera, but what we also focus on is the concept."

A number of new products were launched at the show, including a chair called Halo designed by Sodeau and made from Hypetex, a coloured carbon-fibre material developed by racing car engineers and a new LED light by Jake Dyson, which he claims will last up to 37 years.

"The Ariel light is named after the first British satellite, which used heat pipes," Dyson explains. "We've incorporated those into our products to rapidly draw the heat off the LEDs. Cooling LEDS is critical to prolonging their life."

The show aims to be both trade and consumer-facing and featured an abundance of pop-up shops, cafés and restaurants amongst the more traditional furniture stands.

"The important thing for us with designjunction is to create a destination," Sodeau explains. "The whole thing is much more of a design experience. We want people to come here and not feel they can whizz round and then leave. So really it's a place where you can spend the whole day."

There was an auction of chairs and lamps customised by designers including Tom Dixon and Faye Toogood to raise funds for charity Teddy's Wish.

"We've worked with Britain's most iconic brands – Ercol and Anglepoise," Spencer explains. "They have kindly donated product to customise to raise funds."

The Flash Factories area also returned from last year, with glass-cutting, upholstery and tile and candlestick making all on show.

"I think from a visitor's point of view, they come here to get inspired," Spencer says. "They come here just to get really excited about design."

The music featured in the movie is by Junior Size. You can listen to the full track here.