Dozens of rectangular openings reveal a glazed inner skin behind the yellow granite facade of this canteen building, designed by German studio Knowspace for a Chinese research campus (+ slideshow).

Knowspace designed the two-storey, 660-metre-square building as a dining room and lecture hall for CHEGS – the Center for Hydrogeology and Environmental Geology Survey – in the city of Baoding, Hebei Province. 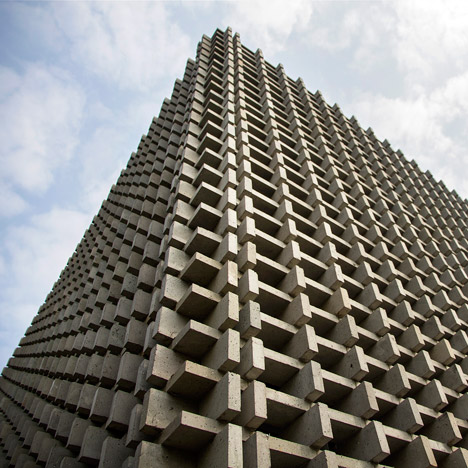 The Berlin-based studio built the structure on the site of a now-demolished 1970s block. Planning restrictions meant the new building had to be created in the exact footprint of its predecessor.

"As a consequence, the canteen is a simple cubic volume," said the team, whose previous projects include two red-brick studios for an artist commune outside Beijing.

"Both floors, due to functional requirements, are flexible single spaces."

The ground floor of the building has an employee canteen and dining room for formal occasions, while the upper floor is a multi-purpose space that can be used both as a games room and a lecture theatre.

The building's facade has two layers – a solid masonry shell that partially encloses an glazed inner skin. Perforations in the brickwork allow light to filter through the facade to the interior spaces.

"As one of the main areas for the institute's field research is Xinjiang," said the architects.

"The field of perforations in the facade may be seen as an interpretation of the Xinjiang raisin drying houses, only that the more permanent stone brick substitutes the original rammed earth brick material."

Floor-to-ceiling sliding glass doors allow occupants to bring ventilation through the building, and a large panel cut though the wall in the east facade frames a view of the surrounding campus from the upper level.

"The main spaces are zoned and differentiated through a performative facade. The outer layer is a screen-like perforated stone facade with gradually varying degrees of opening, both serving as a shading and a opening device," said the team.

The 22-centimetre-thick textured wall, made from locally sourced yellow granite, stands independent of the main structure.

"The yellow granite's surface is hammered or, as they say in China, treated like lychee skin," added the designers.

The upper floor is serviced by three staircases – two by the main entrance, and another at the opposite end of the building that operates as a fire escape.

An intertwined double staircase with angular wooden balustrades rises from the entrance lobby on the eastern side of the building.

One flight of steps faces the entrance to the building, while the other projects into the main body of the ground level. This arrangement was designed to separate traffic entering and leaving the building.

The third staircase has wooden veneered walls that match floorboards and wooden cladding of the upper floor, while the ground floor has polished granite flagstones that reflect the light from square light fittings.

On the ground floor, a set of glazed doors in each of the four facades provides separates accesses to the building. One at the rear leads out onto a basketball court.

The canteen building forms forms the first phase in a reorganisation of the existing campus layout, which also included the renovation of a porters lodge.

Phase two will see a new 10-storey laboratory building constructed and the facade of an existing 1980s office block replaced.

Photography is by Lv Hengzhong.