Chinese architect Li Xiaodong, the recipient of the inaugural Moriyama Prize, completed this building with an elaborate brickwork facade to create offices and dormitories at a building site in Zhejiang Province (+ slideshow).

Li Xiaodong, who received the Royal Architectural Institute of Canada award for his "modest" Liyuan Library project, designed the Screen for a rural site in Dichen Valley, just outside the Chinese city of Ningbo.

It is the first building of a larger development, so the architect was tasked with designing both offices and accommodation for the team that will build the rest of the complex. 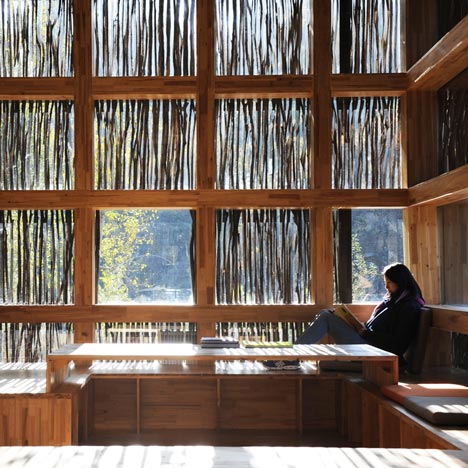 His concept was for a structure that impacts on the landscape as little as possible.

"To be able to appreciate and respect the pristine site in Dichen Valley in its totality, we proposed a series of carefully placed architectural interventions to create a route of pure and distinct landscape experiences," said Martijn de Geus, one of the architects on Li's team.

The building sits on the flattest section of the mountain slope. The majority of the structure is single storey, but a smaller second storey was created towards the northern end of the site, where the ground level drops by around three metres.

The facade is perforated wall that at first glance appears to be made from concrete, but on closer inspection is revealed to be a complex brick grid that combines a traditional local craft technique with modern engineering.

"We thus take a known, familiar concept, such as the solid brick wall, and instead we create a floating, permeable and open screen of bricks around the perimeter," said De Geus.

"This thus creates a contemporary response in line with the local Chinese conception of space, in which mass and context are not solid objects, but become a series of linked, permeable environments," he said.

This wall forms an outer skin that wraps around most of the building's perimeter. Behind it, interior spaces are laid out around a pair of courtyards to foster a sense of community between residents.

"The relation between building mass and the organic environment is softened by the facade, conceived as a wrapped-around screen that makes the mass disappear and becomes a changing layer that interacts between inside and outside," added De Geus.

Containing four trees, the first of the two courtyards was designed as a more social space, positioned between the workspaces and the communal living and dining rooms.

The second courtyard opens out to the inclining mountainside. This space was conceived as a more private domestic area, accessible from the dormitories at the southern end of the plan.

Both courtyards are flanked by bamboo screens, designed to offer a warm contrast to the stark grey brickwork of the exterior. Bamboo was also engineered into planks to create flooring.

Photography is by Martijn de Geus.