The walls of this house in Poland by Kropka Studio are covered in gabion baskets filled with the same local limestone used to build nearby castles and churches (+ slideshow).

Kraków-based Kropka Studio designed the property for a family of four, who asked for enough space to host large gatherings at a plot near the city of Zawiercie, on the edge of the protected Eagles' Nest Landscape Park. 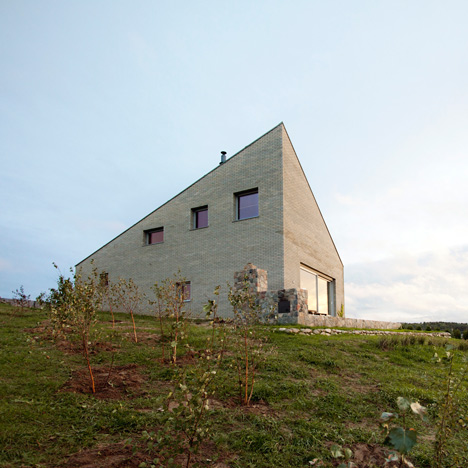 Polish house offers an abstract take on a traditional barn

The site is within a region known as Polish Jura, where the hilly landscape of limestone rocks, cliffs and valleys have influenced the appearance of vernacular architecture, including churches, castles and farm buildings.

Gabions filled with loose rocks or soil are more typically used as stabilisation to prevent erosion and for other engineering applications, but in this case they form a decorative layer surrounding the house.

"Gabion cages were used as an outer cladding to reflect local building tradition in a modern way," architect Gosia Łapaj told Dezeen. "They provide a type of camouflage net which covers the bright, spacious interior."

The cages are stacked on top of each other and fixed to the house's structural walls, providing a cost-effective and durable cladding that utilises a locally available material.

Traditional building styles and planning restrictions also influenced the shape of the house, including the requirement to include a pitched roof, which has been covered with titanium zinc sheets.

The main volume of the property is connected to a lower flat-roofed garage by a walkway made from timber battens, which provides some shade while allowing light to penetrate.

Wooden boards were also used to clad a bedroom unit that projects into the garden and a triangular bay that sticks out next to the kitchen area.

The wood-lined walkway leads to an entrance corridor that opens into a double-height living space with a ceiling that follows the shape of the pitched roof.

A staircase near the entrance was constructed from steel, with oak treads that cantilever from the frame to give it a visually light appearance.

The main living area is filled with daylight via large glass doors. These slide open to connect the space with a wooden deck projecting out into the garden.

The bedroom wing forms the shorter section of the L-shaped plan and has its own small deck, as well as an en-suite bathroom featuring wooden surfaces similar to those found on the exterior.

A mezzanine at the top of the stairs provides access to two bedrooms and a bathroom housed in a unit that extends the full-height of the house, with storage for the kitchen built in on the ground floor and tables made by 5mm.Studio.