The street-facing elevation of this brick and steel extension to a 1920s Montreal property echoes the proportions of the original building, but at the rear a large angular outcrop projects over the back garden (+ slideshow).

Montreal studio Naturehumaine designed the 870-square-metre extension – comprising a basement playroom, ground-floor dining room and first floor study – for a family who had outgrown their residence in Dulwich, Montreal.

As part of the renovation, the architects reorganised the interior space, situating an open-plan living area around a large atrium on the ground floor and moving the children's playroom to a newly formed basement.

"They wanted a contemporary extension that would harmonise with their existing house and highlight and expose the structural brick," said project architect Stéphane Rasselet, whose firm's previous projects include a metal-clad lake-house in Quebec. 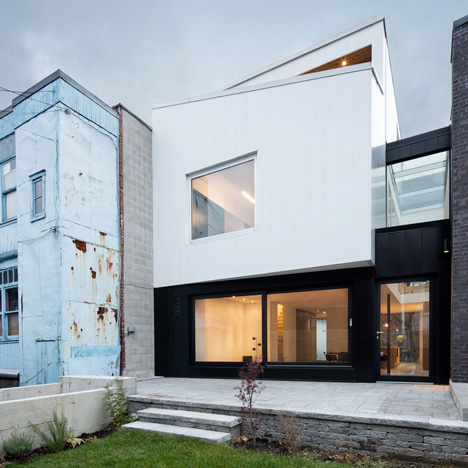 A dark brick facade in keeping with the scale of the existing building wraps around the ground floor of the extension, while the upper floor is clad in sections of steel sheeting.

"The city's regulation required brick on the front facade, so we chose a brick that related to the tones of the existing house," said Rasselet.

Facing the street, the extension has two large upper floor windows and a garage, while at the rear of the house an angular steel volume projects over the garden.

"In the back we wanted a more clear contrast between two very distinct architectural languages," said Rasselet.

"We find that the juxtaposition of the traditional existing house next to the more daring contemporary extension, further enhances the architecture."

Internally, the overhanging volume resulted in a large bay window with a faceted surround, which can be found on the upper floor.

"This window is the generating force of the geometry of the extension whose lines converge to this opening, focusing our view into the back yard," said Rasselet.

The window overlooks a large atrium enclosed by white steel mesh balustrade. "It is a material that we like for its geometric effect and the transparency it provides," added the architect.

A nook created between the mesh and the window on one side of the atrium forms a "sleeping basket" offering views of the backyard and interior space below.

"It was inspired by the sleeping basket on the roof of Rudolph Schindler's house in LA. It is an area to lie down and rest. An area for contemplation relaxation," said the architect.

The area around the "sleeping basket" is lined in white-washed strips of pine designed to maintain "a warm atmosphere" in the glazed space.

On the opposite side of the atrium, an office is positioned along the red-brick wall of the original property. Openings in the wall lead to three bedrooms, two bathrooms and a staircase that connects to the lower floors.

The staircase leads into a glazed volume inserted between the old and new structure.

Off the hallway, an open-plan kitchen and living room are located in the old section of the house, while cutaways in the once-exterior brick wall connect to a dining room below the atrium in the extension.

Two light wells against the wall, coupled with the large central atrium, create a visual connection between the communal areas on the ground floor with private spaces on the second.

In the dining room a length of dark-stained wood is built into the bottom of the window frame forming a sill as well as a table. Five pendant lights on long cables hang from the double-height ceiling over the table.

In the kitchen, sections of dark-stained oak enclose an island containing storage and a bathroom.

The dark wood contrasts with the white oak floorboards and "light and minimal" interior decoration of the rest of the property.