News: Italian design brand Moroso has produced a limited-edition set of the table designed by architect Daniel Libeskind for an installation by artist Marina Abramovic (+ slideshow). 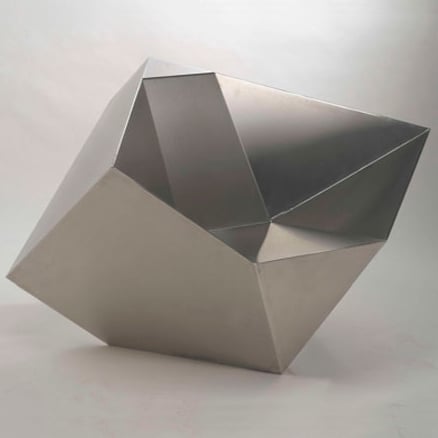 The installation involved participants sitting at the table for a minimum of six hours, while separating out and counting lentils and grains of rice.

Libeskind's design is a series of connected angular planes that form the back, seat, base, supports and tabletop. The work surface is angled down towards the user and features a small lip to prevent the grains from rolling off.

"The slab of cement folds over itself, enfolding and pushing the body to carry out the performance, while the vigorous gestural expressiveness of the form is embossed across its surface with complex geometries that give a sense of visual fragmentation," said a statement from Moroso.

First produced by the brand in wood, the prototype table was presented during Milan design week in April when students took it in turns to participate in the rice-counting exercise.

More were created when the project was developed to include multiple participants at the Centre d'Art Contemporain in Geneva from 1 to 11 May.

The new limited-edition pieces are formed from cement rather than wood to differentiate them. The first in this set was recently presented and auctioned in Basel on 20 September.

A cement version will also be presented alongside one of the wooden prototypes at Art Basel Miami Beach next month.

The collaboration between Moroso and Abramovic began when the brand's creative director Patrizia Moroso met the artist in 2010.

"Marina has always been a great admirer of Moroso products, and personally chose many of our pieces for her private home in New York," said Moroso. "The idea of working together on a shared project was a desire we had both developed over these past years."

Photography is by Gianni Antoniali.