Polish-American architect Daniel Libeskind's studio has designed a contemporary extension to the iconic Boerentoren tower in Antwerp, Belgium, which was once Europe's tallest high-rise.

The proposal is being developed with local architecture studio ELD and was the winning entry in a design competition held by its current owner, the port operator Katoen Natie.

Katoen Natie's goal is to transform the building, which was one of Europe's very first tall buildings and was the tallest high-rise in the continent when it completed, into a cultural institution for the public while preserving its architectural heritage.

"In its day the Boerentoren was an unprecedented art deco design, just like the Empire State Building in New York, where I live," said Libeskind following the announcement, reported Flemish broadcaster VRT.

"It was a private building with flats and offices. Today we are transforming the entire complex into a public space for art."

Restoration work on the Boerentoren has already begun, with its interiors gutted due to the presence of asbestos. However, works on Studio Libeskind's design are still yet to be approved by authorities, so the final design may change, reported VRT.

If approved, Studio Libeskind's extension will sit over the top of the tower like a crown, juxtaposing the tower's art deco style that will be preserved.

Extension will not exceed cathedral height

The visuals also indicate the studio plans to add a glass tower to the rear elevation, containing areas for an abundance of plants that will be visible from the outside.

Both additions are depicted with angular glass forms in the images – a typical feature in much of Libeskind's work.

While the extension's exact height has not been disclosed, it will not exceed the height of Antwerp's cathedral, which is 123-metres high.

If built, the Boerentoren's extension will be opened to the public and used as a space from which to admire Antwerp's skyline and drink and dine.

As part of the project, Studio Libeskind plans to transform existing parts of the tower into various cultural and educational facilities, including three floors of exhibition spaces.

An existing basement level and two levels of parking will also be converted into galleries dedicated to the history of Antwerp.

Renovation not the first at Boerentoren

The Boerentoren, which translates as the Farmer's Tower, was originally built as a residential tower before the bank KBC transformed it into an office tower.

KBC commissioned a renovation and extension of the building in the late 1960s, after being forced to either demolish or revamp it. 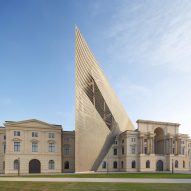 Studio Libeskind was founded in Berlin in 1989 by Libeskind with his partner Nina Libeskind.

The studio is best known for creating poignant monuments and museums for tragic events, with the most famous examples being the Ground Zero masterplan in New York and the Jewish Museum in Berlin, which also made use of his trademark style of sharp angles and slanted surfaces.

The visuals are by Luxigon.