Continuing our series on deconstructivism we look at the Jewish Museum in Berlin, one of the architect Daniel Libeskind's first completed projects.

The zigzagging, titanium-zinc-clad building was the winner of an anonymous competition held in 1988 for an extension to the original Jewish Museum, which had occupied an 18th-century courthouse since 1933.

Libeskind responded to the competition with a highly experiential and narrative-driven design called "Between the Lines", with a distinctive form sometimes described as a "broken Star of David",

Inside, sharp forms, angular walls and unusual openings to create disconcerting spaces informed by the "erasure and void" of Jewish life in Berlin after the Holocaust.

"That was my intent in creating a building that tells a story, not just an abstract set of walls and windows," he continued.

The extension stands apart from the historic museum and has no entrances or exits of its own, accessible only via an underground passageway, "because Jewish history is hidden," explained Libeskind.

"I sought to construct the idea that this museum is not just a physical piece of real estate. It's not just what you see with your eyes now, but what was there before, what is below the ground and the voids that are left behind," he continued. 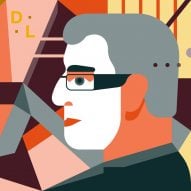 The idea of movement – a key concept of deconstructivism – informs three axes that cut across the zigzag plan and organise movement through the building: the Axis of Continuity, Axis of Exile and the Axis of the Holocaust.

The Axis of Continuity begins with the steps down from the original museum and leads up a long, high staircase that provides access to the permanent exhibition spaces on the upper storeys and ends in a blank white wall.

The exhibition rooms have, since 2020, contained the exhibition "Jewish Life in Germany Past and Present", telling the story of Jews in Germany from their beginnings to the present day.

A staircase with thin, diagonal windows provides visitors with glimpses outside as they ascend to the buildings upper level

Externally, these windows cut across floor levels to create an abstract pattern - based on the addresses of notable Berlin figures – that makes it impossible to determine where one floor ends and another begins.

The Axis of Exile is dedicated to the lives of Jews forced to leave Germany, and leads to the Garden of Exile, where a series of 49 tall, tilted concrete boxes are topped with plants. 48 contain soil from Berlin and one soil from Jerusalem.

The Axis of the Holocaust contains displays of objects left by those killed by the Nazis, and leads to a separate, stand-alone concrete building called the "voided void" or Holocaust Tower.

Only accessible through the museum's underground passageways and described as an "unheated concrete silo", this exposed concrete space is illuminated through a narrow slit in its roof.

"Why should it be comforting? You know, we shouldn't be comfortable in this world. I mean seeing what's going around," he added.

Where the three axes meet is the Rafael Roth Gallery, an installation space that hosts changing installations.

Cutting directly through the centre of the building is a strip of five exposed concrete voids that "embody absence", only some of which can be entered.

"It is a straight line whose impenetrability becomes the central focus around which exhibitions are organised," said the practice.

"In order to move from one side of the museum to the other, visitors must cross one of the bridges that open onto this void," it continued.

These spaces, which are unheated and only illuminated by natural light, are designed to interrupt the flow of movement through the building, representing what Libeskind describes as "that which can never be exhibited when it comes to Jewish Berlin history: humanity reduced to ashes."

One of these voids contains an artwork called "Shalekhet (Fallen Leaves)" by the artist Menashe Kadishman, comprised of more than 10,000 faces made from iron plates that cover the floor.

Minimal, grey and white finishes have been used in the interiors, with areas of built-in lighting highlighting the axial routes through the museum.

More recently, Libeskind has returned to the site to design two extensions –  a steel and glass covering for the courtyard of the historic courthouse, and the nearby W. Michael Blumenthal Academy.

Libeskind's work at the Jewish Museum led to commissions for several memorials and museums over the rest of his career, including the Dutch Holocaust Memorial of Names in Amsterdam and the masterplan for the Ground Zero site following the 9/11 terrorist attacks.