Water flows both up and down from this dual-nozzled faucet designed by ECAL graduate Alice Spieser, which combines the functionally of a standard tap with a drinking fountain (+ movie).

Alice Spieser came up with the idea for her graduation project, the Down Up tap, after observing fellow students at Swiss university ECAL craning their necks into uncomfortable positions to drink directly from the faucet.

"A sip of water should be pleasant, and not something embarrassing," Spieser told Dezeen. "I decided to make it a nice gesture." 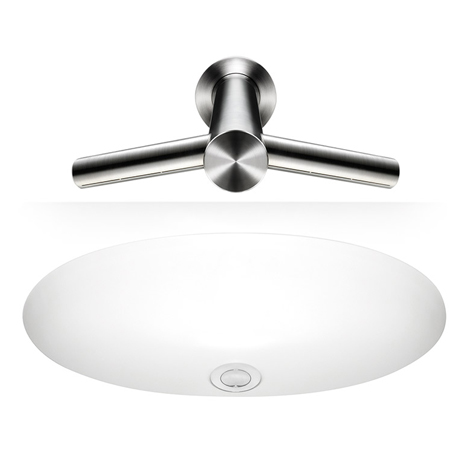 "The idea was to produce an object that permits the user to drink tap water in a simple gesture without necessarily using a glass."

The industrial designer has produced the tubular bathroom tap with two angled spouts – one that projects water upwards and another that pushes it down into the sink, prompting the name.

"For me it was the most logical and representative form of the idea that first of all the water goes down to wash their hands and then up to drink," said the designer.

The direction of water flow is controlled by a single hole cut in the end of both the up- and down-facing nozzles.

When the lower opening is blocked by a finger-tip the water is forced to spurt upwards, allowing users to rinse their mouths or take a drink without the need for a glass.

"If you obstruct this one with your finger the water rises in the spout at the top and create enough spray to drink in a nice position without any splash," the designer explained.

Left uncovered, the water naturally flows through the down-spout over the sink for hand-washing.

A disk lifts from the top of the tap stem to control water pressure, while rotations to the right or left can be used to adjust temperature.

The "anthracite" charcoal-grey tap is made from a plastic resin and formed by 3D printing – a decision Spieser says came down to cost.

"In an ideal world my final object would be brass, but I modelled it as if it had to go to work tomorrow, with real constraints of material normally used for making taps. It's ready for manufacture," she said.

"I loved the idea making a tap both industrial and artisanal. It's exciting!"

Spieser worked with Swiss tap manufacturer KWC to produce the internal parts for the mixer.