Staircases descend around a courtyard hidden inside this four-storey concrete house, set into a steep rock face in Mexico City by local studio 3archlab.

3archlab designed the three-bedroom dwelling, called Casa BC, for a site in Mexico City that is hemmed in to the rear by a stoney cliff wall and at its sides by neighbouring properties. 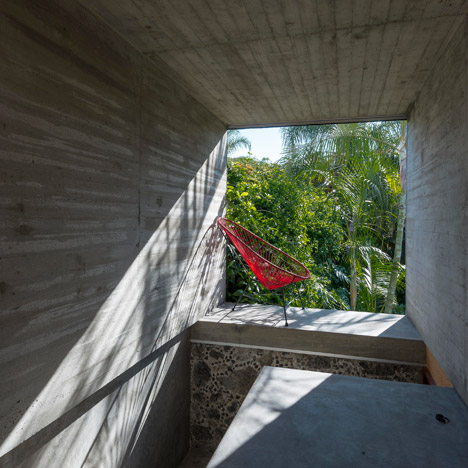 Approached by a client who asked for a home that had an "extreme relationship with nature" with every space surrounded by it, the architects came up with a house that connects at every floor to an outdoor courtyard sandwiched between the back of the house and the cliff face.

"They wanted the house to help them disconnect from the city, like a summer or vacation house," said studio architect Emilio Ades Cohen.

The entrance to the property is located away from surrounding dwellings on the uppermost floor, with access through either a glazed door or metal garage shutters that open from the hill-top road.

A roof terrace, garage and office occupy this top floor, while the main living area with a kitchen, lounge, dining and laundry rooms is situated across the level below. Three bedrooms, bathrooms and a TV room sit beneath that, and on the lowest storey there is a cellar, gym and spa, and a garden that runs partially below the house.

The main body of the building is made from concrete cast with wooden formwork. Three flights of stairs – one in the courtyard and two inside the building – connect the four levels and are designed as independent structures in a mixture of black concrete, stone and pine wood.

"We used existing stone and wooden formwork, and respected the site topography to create terraces and platforms," Cohen told Dezeen.

The external stairwell, constructed from concrete and stone, wraps around the courtyard and a large tree that grows in its centre. The area is backed by an existing stone wall that reaches up the face of the cliff.

"We used mainly ferns in the garden and in the pots that surround all of the rooms to help us create spaces in connection with nature," said the architect.

The steps connect to a series of slim concrete walkways with black metal railings that run along the back of the house.

Glass panelling concertinas back at each level, connecting rooms to the concrete terraces.

On the interior, a pine staircase provides access between the garage, kitchen and TV room in inclement weather. Cupboards built into the stairs creates storage for the kitchen.

A further flight of wooden steps that continues to the ground floor doubles as a bookcase.

At the bottom level, the courtyard stretches underneath the house as series of shallow steps, which gradually descend down to the front of the house. These are made from stone and boxed in by wooden formwork left over from the concrete construction.

On the front facade, black concrete planters enclose balconies that overlook the city.

Three vertical slabs of concrete extend out from the frame of the house to shield the terraces from views on either side.