The eerie Fantoom exhibition is on display at the Broelmuseum in Kortrijk, opened to coincide with the city's Interieur design festival last month. 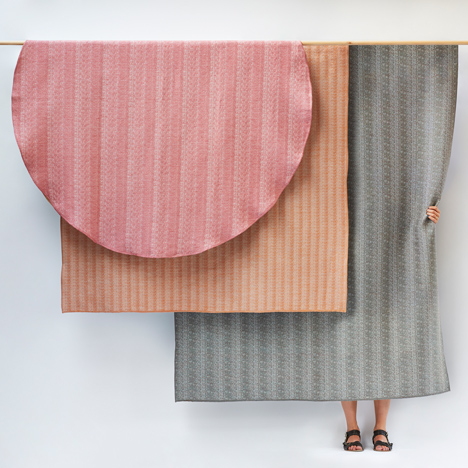 Glithero has used the Pepper's ghost illusion – commonly used in theatres or haunted houses – to reflect objects laid horizontally in crates onto sections of suspended glass so they appear to stand vertically within the museum's rooms.

The technique requires specific lighting conditions and the right angle of the glass sheet to make the image on the transparent pane appear realistic.

Glithero's aim is to capture the moment that an object is removed from display, leaving a faint trace of its presence after it has been packed away – "the last frame in a transition to nothingness".

"Fantoom is about perception and transience," said Gilthero. "Think about the discoloured imprint on wallpaper when a painting has been taken off the wall. When an object that has been in our presence for a very long time is gone, it feels as if some of the object's virtues still remain in place."

The exhibition is split over several rooms across the ground floor of the Broelmuseum, situated in a former mansion on Buda Island in the centre of Kortrijk.

Glithero chose to display items from the museum's collection of art and design pieces, ranging from the 16th to 19th century.

In the first space, a crystal chandelier appears to have materialised in the centre of the room as if suspended from the ceiling.

The ornamental lighting piece is actually laid out in the crate below, and simply reflected on the glass disk.

Moving around the room, it becomes apparent that the chandelier isn't really there and visitors are able to look into the top of the crate to better understand how the illusion works. A mirror hung on the wall behind the glass also reveals that there is no chandelier hanging in the space.

The second room features four crates surrounding a central plinth. The Pepper's ghost effect is employed separately with the vases in each crate, so four different vessels appear and disappear from the plinth as the room is circled.

A marble bust is displayed in the same way in another of the Broelmuseum's lavishly decorated rooms, where the Fantoom exhibition will remain until 14 December.

Photography is by Gerald Van Rafelghem.