An elevated concrete tunnel provides the entrance to this house in Cuernavaca, Mexico, created by local architecture studio APT in a converted colonial-style annex (+ slideshow).

The Mexican studio was tasked with restoring a series of 70-year-old out buildings in the grounds of a larger house, to provide a home for a young historian.

Originally a series of small rooms for domestic staff surrounding a first-floor terrace, the building's walls were torn down by the architects to maximise space, creating an open-plan home named Leyva 506 with a central courtyard sheltered beneath two plywood canopies. 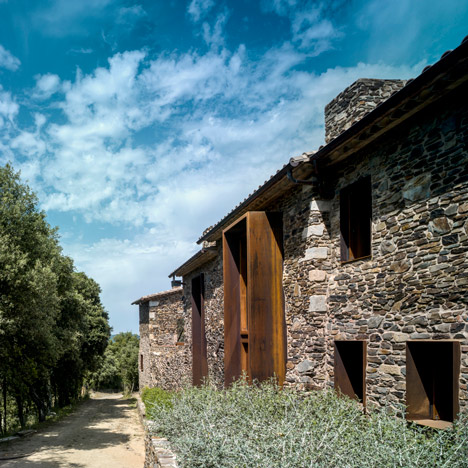 APT's biggest intervention was to add a concrete walkway that bursts through the original stone facade. A door underneath leads up into this space, creating a grand entrance to the residence.

The new walkway spans the southern edge of the property, creating a viewing deck overlooking the gardens to the west of the building. A net can be rolled over its front to prevent mosquitos from entering.

To accentuate the length of the corridor, the architects also added a strip of lighting running along the skirting of the wall.

The removal of existing partitions allowed the architects to open the interior up to the elements. A set of steel folding doors separate the kitchen and living space from a central patio and have been painted red – the original colour of the wall opposite.

"The main request was to have a large multifunctional space that could be opened to the outside," architect Lilian Rebollo told Dezeen. "The objective was to cover all specified necessities, taking full advantage of the existing building."

The east side of the site was repurposed to create a multi-use work space for the client, screened behind a low glazed partition.

Bespoke shelving and storage was fitted around the original windows to house a library, and to include hidden desks and flexible work spaces for the client.

The remaining spaces provide a bedroom and bathroom on the north side of the living area.

APT used simple materials in order to be sensitive to the heritage of the property. Brick walls were white washed, while untreated plywood was used for the ceiling and furniture to add warmth to the conversion.

For the floor, the architects used colourful tiles that add yellow tones to the interior. "We used pressed mosaics – a tile that was introduced to Mexico at the time of the Spanish colonisation," said Rebollo.

"In the state of Morelos, local craftsmen made a variation to the original system that does not use a mould and the drawing of the tiles is made by hand, which makes it a unique, organic and handmade piece," she said

Strips of polished concrete separate these tiled surfaces from the outdoor areas, while a mixture of antique and contemporary furniture finishes the space.

Another plywood canopy was installed at the rear of the property. Clerestory windows just below ventilate the apartment and bring natural light in from the east.

Photography is by Louis Gordoa.