The UK-based Centre for Process Innovation has unveiled its vision for an airplane cabin with no windows at all, instead projecting 360-degree views from outside throughout the interior using flexible screens built into the fabric of the cabin.

A conceptual video from the Centre for Process Innovation (CPI), which works with clients to prototype projects and ideas, shows a plane interior with seemingly invisible walls, panels and ceiling. These would be covered with screens made from flexible Organic Light Emitting Diode (OLED) technology – ultra-thin, lightweight and malleable displays – streaming high-quality footage broadcast live by cameras outside of the plane. 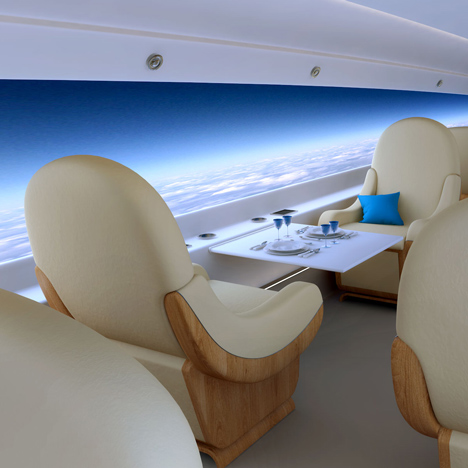 Various images could be displayed on the rear panels of seats – including websites, in-flight entertainment, and another projected view of what the sky looks like from the outside. All displays would be made from OLEDs.

OLEDs generate light when electricity is passed through layers of organic semiconductor material mounted on glass. They require less energy to create crisp images than LEDs or liquid crystal displays, emit very little heat making them safe to use with soft furnishings, and could be less than a millimetre thin in the near future.

As well as frightening aviophobes, removing windows entirely would significantly reduce the weight of a craft – potentially reducing its fuel consumption and carbon footprint.

CPI's director of printable electronics, Jon Helliwell, told the Guardian that the business had been thinking about how to reduce weight in aircraft – and taking all the windows out was the logical next step. "That's what they do in cargo aircraft," Helliwell said.

But the aviation industry would not be ready to make any such plans a reality for at least 20 years, a spokesperson for CPI told Dezeen.

"We believe fully flexible OLED technology at a scale able to be used in the aerospace market will be available in approximately 10 years," he said. "But the aviation industry works 10 to 20 years ahead in terms of design, therefore the concept shown in the video will not become a reality for at least 20 to 30 years."

According to the spokesperson, CPI plans to work with designers to understand "how the flexible, lightweight OLED technology we are developing can be best used, and then engineers can become involved."

"It's a collaborative process and our concept was a call to action," he added. "Imagine we are completing a journey along a technology roadmap, where the windowless fuselage is the furthermost point."

"The technology exists at a smaller scale currently, and we are working towards significantly scaling it up and producing it cheaper, better and faster."