The surface of the Van Gogh-Roosegaarde Bicycle Path is coated with a special paint that uses energy gathered during the day to glow after dark. 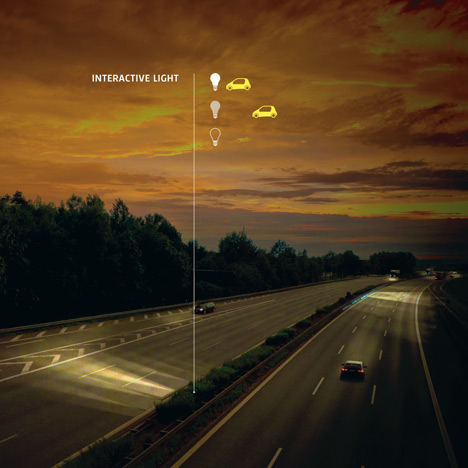 Forming part of the Van Gogh cycle route through the Dutch province of Noord Brabant, where the artist was born and raised, the kilometre-long section of path illuminates in swirling patterns that reference his 1889 painting of a night-time scene.

Roosegaarde told Dezeen that this method of illumination is "more gentle to the eye and surrounding nature" that other lighting infrastructure, and creates a "connection with cultural history".

A nearby solar panel is used to generate power to illuminate the coated surface, which was developed with infrastructure firm Heijmans. LEDs along the side of certain curves in the path cast extra light, meaning the path will still be partially lit if the weather has been too cloudy for the panel to charge the surface to its full brightness.

"It's a new total system that is self-sufficient and practical, and just incredibly poetic," said Roosegaarde.

After its official opening at 8pm this evening, the bicycle path in Nuenen – just east of Eindhoven – will be open to the public year-round for free.

The project is the second manifestation of Roosegaarde's Smart Highways research into creating safer and more energy efficient road networks.

Earlier this month, his pilot Smart Highway – named Glowing Lines – opened along a stretch of motorway in Oss where the same photo-luminescent paint is used to mark out the edges of the road.

Future plans include road lanes that will automatically charge electric vehicles and alert drivers when their surfaces become icy.