Designer Daan Roosegaarde is the latest creative to collaborate with Carlo Ratti's Scribit project, creating a robot-drawn illustration based on his ongoing research into space waste.

Launched via a kickstarter campaign in 2018, Scribit is a small robot that draws erasable images on vertical surfaces in marker pens, effectively turning any wall into an automated whiteboard.

Designers Carlo Ratti Associati (CRA) wanted Scribit to not only be a source of constantly updating artworks but also data, news, and information on social and environmental causes.

Roosegarde's collaboration with the company represents a combination of the two. It is an exclusive, original illustration from Studio Roosegaarde about space waste — a problem that the Dutch designer terms "the smog of our universe".

Titled What Connects Us?, it shows the globe with the known orbits of space junk superimposed on top.

There are an estimated 8.1 million kilograms of space waste circling the earth, where it poses a danger to spacecraft.

According to Roosegaarde, who has been exploring the issue through his Space Waste Lab design project, this junk — mainly old satellites, spent rocket stages and associated fragments — could be salvaged and upcycled into something useful.

"We need to look at space in a more effective way," said Roosegaarde. "What is space waste? How can we fix it? What is its potential?"

Some of the ideas to come out of the Space Waste Lab, which included NASA and the European Space Agency among its collaborators, were to make the waste into shooting stars, use it to 3D-print moon habitats or assemble it into a gigantic sun reflector to reduce climate change.

Roosegaarde's goal in collaborating with Scribit is to raise awareness about the issue at a time when human pollution is mainly thought of in terms of land, sea and air.

The little robot is pitched at both home and office environments as an alternative to an artwork hung on a blank wall or as a low-refresh screen.

"With Scribit, we aim to bring the Space Waste Lab's mission into people's homes, allowing them to view it and wonder," said Roosegaarde.

The illustration is the third in a series of exclusive artworks made for Scribit Originals, the robot maker's art streaming platform.

The series launched earlier this year with a work produced by artist Olafur Eliasson and his social enterprise Little Sun.

Scribit users can access the artworks alongside hundreds of others in the product's app, or they can create their own work.

The robot can be set up by stringing it up between two nails and loading it with four marker pens. 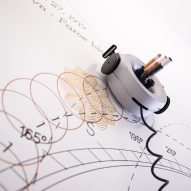 Scribit was invented at CRA, the design and innovation office of Italian architect and MIT professor Carlo Ratti, and launched by its own spin-off company.

Its crowdfunding mission in 2018 was hugely successful, raising over US$2.4 million across Kickstarter and Indiegogo.

The company plans to exhibit its full Scribit Originals series at Milan design week in April 2020.