Warsaw office MFRMGR has revealed designs to revitalise a former Polish observation tower in the Baltic Sea to create a base for water sports enthusiasts and researchers, accessible only by boat.

The lookout station formerly operated as a watch tower for a German research facility responsible for the development of torpedoes during the Second World War, and is one of several derelict structures that rises out of the waters of Puck Bay, on the northern coast of Poland.

In its current damaged and inaccessible state the building occasionally operates as a set for film productions and a platform for practicing divers, but is mainly disused and is quickly deteriorating. MFRMGR plans to refurbish the structure and add a new second level. 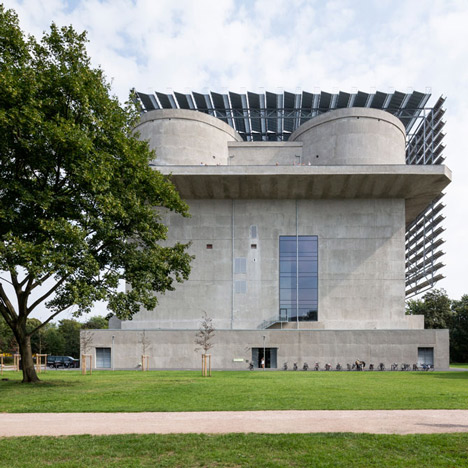 "It is somehow mystic and inaccessible, arising the interest of sunbathers, sailors and adventure-seekers," said the architects, who are also working on an indoor diving and skydiving centre in a pair of disused cement silos outside Warsaw.

Located just over a mile offshore, the building can be accessed by boat in summer and by hovercraft in winter when the bay freezes over.

"Everyone staying there can feel as though they were the SPECTRE chief, Ernst Blofeld," said the studio, comparing the building to a setting from a James Bond movie.

The upper-level extension will be a mirror image of the original structure, lowered onto the observation deck of the tower in a Tetris-like formation.

"The idea behind the form of the facility is to repeat an inverted body of the existing facility," said the team.

The original clinker brickwork – bricks heated to a high temperature to increase durability – will be restored, while original windows will be bricked up to make way for a new arrangement of windows and openings.

A modern version of the same material has been chosen to face the new structure to "subtly highlight the boundary between what is new and is old."

"This manner of shaping the building body allows adapting it to the new function without diminishing its historic nature," explained the architects.

A spiral staircase will lead up to an observation deck in a gap between the old and new structures where a sauna, storage area and terrace will be fronted by a curving concrete balustrade retained from the original building.

A bedroom accommodating bunk beds for up to eight people will be located upstairs, while a work space and living area will occupy the original structure.

The building will harvest renewable energy from the wind and sun, and will also be equipped with a built-in sewage tank, food storage units and a power generator to take over during electricity outages.

A decked platform surrounding the structure will create a breakwater and miniature harbour to prevent damage from high waves and adverse weather, as well as giving occupants space to securely moor their boats.

Three floating "islands" with planting and a rainwater collection tank will link the decking with the building, accommodating a vegetable and herb garden, and an area dedicated to birds.

The project is expected to be completed in 2016.