World Architecture Festival 2014: Johanna Hurme of Canadian firm 5468796 explains the use of wooden "quills" in the proposed art gallery extension that was named Future Project of the Year 2014 (+ movie).

5468796's proposal for an extension to the Art Gallery of Greater Victoria in British Columbia, Canada, is covered in wooden spines designed to filter the light as it enters the building.

"The gallery is situated in a very lush northern rainforest and there's a beautiful quality of light on the site, with dappled light and shadow on the ground," explains 5468796 principal Hurme.

"We wanted to recreate that quality of light within the gallery and the quilled surface was there to modulate the light and bring that quality into the interior space." 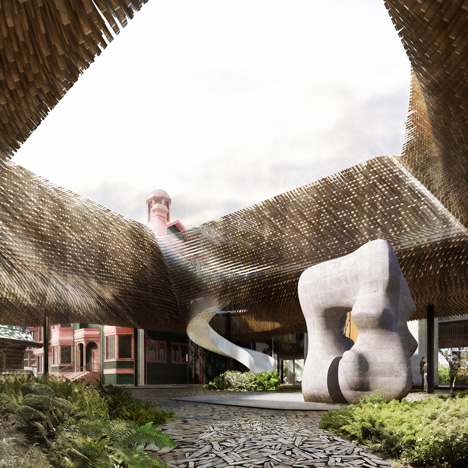 She adds: "The material that we chose was cedar and the hope is that it [would] age over time, just like the trees surrounding it."

The gallery was originally an early 20th-century mansion, which has been extended and added to over the years. 5468796 proposed removing those additions and creating a single new elevated extension.

"Our response was, instead of adding to the numerous additions that were done over the years, to take those additions away and build entirely new," Hurme explains. "[We wanted to] lift the building up to the second level."

The proposal will never actually be built, as the art gallery chose to develop a different scheme.

"The competition was launched in 2013 by the art gallery itself," says Hurme. "We didn't actually win the competition, so to get the recognition [of being named World Future Project of the Year 2014] from a very prestigious jury is unbelievable for us."

World Architecture Festival 2014 took place at Marina Bay Sands in Singapore from 1 to 3 October. Award entries for next year's festival are open from February 2015.