Wurm + Wurm was tasked with adapting the empty shell of a former storage unit for industrial equipment in the town of Jena, creating a modern workplace for three different companies accommodating flexible offices and a workshop. 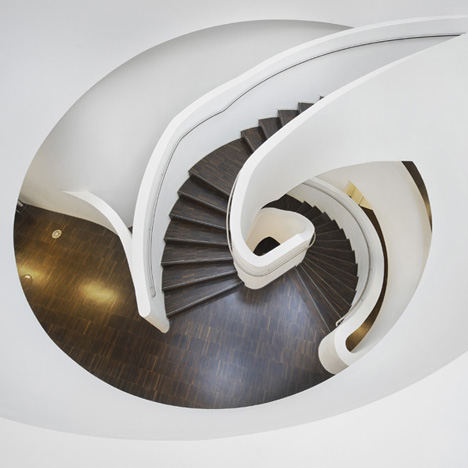 The original structure contained a cavernous space into which the architects inserted an independent load-bearing structure that supports two additional levels to create the floor space required by the client.

"The decision to retain as much of the old structure as possible is the decision to keep a piece of industrial history from the former GDR alive," architect Sebastian Cleef told Dezeen.

"Therefore the old structure of columns and roof trusses can still be seen inside the building."

A reinforced concrete elevator shaft and a masonry structure that accommodates the building's sanitary facilities help to prop up the new roof, while a framework of columns and beams supports the extra storeys "like a table".

The original concrete shell was removed to make way for the new facade, made from prefabricated concrete. This was assembled on site in just two weeks and envelopes an insulating layer of glazing and aluminium sheet cladding.

Hexagonal apertures in the concrete skin frame views from inside, while the thickness of the material helps to shield the interior from direct sunlight.

The holes merge with larger openings to form entrances with irregular edges that continue the pattern of the facade.

"We didn't want to build a typical facade indicating an office building," explained Cleef, "so we wrapped a consistent pattern around the building that doesn't reveal what is happening inside."

A lobby on the ground floor leads to a staircase housed in an angular volume that projects from one of the end walls. According to the architect, this form was influenced by the geometry of the windows.

The main space on the ground floor accommodates a production and assembly facility, which leads to offices contained on the two storeys above.

One corner of the top floor is set back to create space for a balcony that looks out towards the surrounding countryside through the apertures in the facade.

Photography is by Ester Havlova.