News: visitors to the National Building Museum in Washington DC can now get lost inside a concave wooden maze installed by Danish architecture firm BIG (+ slideshow).

Located inside the west court of the National Building Museum's Great Hall, the BIG Maze is an 18-square-metre maze built entirely from Baltic Birch plywood.

BIG – the firm led by architect Bjarke Ingels – developed the form of the maze by combining styles of mazes throughout history, from ancient Greek labyrinths to European hedge mazes and modern American corn mazes.

"The concept is simple: as you travel deeper into a maze, your path typically becomes more convoluted," said Ingels, describing the concept when the project was unveiled in April. 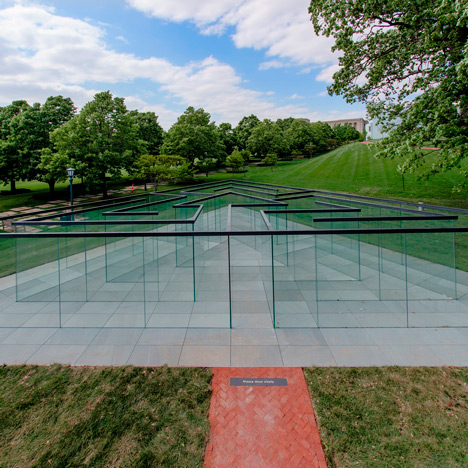 "What if we invert this scenario and create a maze that brings clarity and visual understanding upon reaching the heart of the labyrinth?" he said.

The indoor maze has a perimeter height of five and a half metres. This gradually diminishes towards the centre, so that as people reach the middle they can see their route out.

Visitors to the museum's upper-floor balconies are also offered an aerial view of the spaces below.

"From outside, the maze's cube-like form hides the final reveal behind its 18-foot-tall walls. On the inside, the walls slowly descend towards the centre, which concludes with a grand reveal - a 360 degree understanding of your path in and how to get out," said Ingels.

The BIG Maze opened to the public on Friday and will remain in place until 1 September. It will be followed up by a wider exhibition of BIG's work, which will open in January 2015.

"This distinctive maze offers our visitors a chance to physically interact with the work of a cutting-edge, international design firm," said Chase W. Rynd, the museum's executive director. "It will be a great framework for exploring the exhibition in a few months."