Museum Boijmans Van Beuningen in Rotterdam is hosting an exhibition of work completed by Studio Wieki Somers over the past decade, including a collection of lamps based on sixteenth century Japanese Samurai flags (+ slideshow).

The exhibition is titled Out of the Ordinary and features around 30 objects designed by Wieki Somers and Dylan van den Berg since they founded their studio in 2003, with an emphasis on more recent projects and pieces that have not previously been shown in the Netherlands. 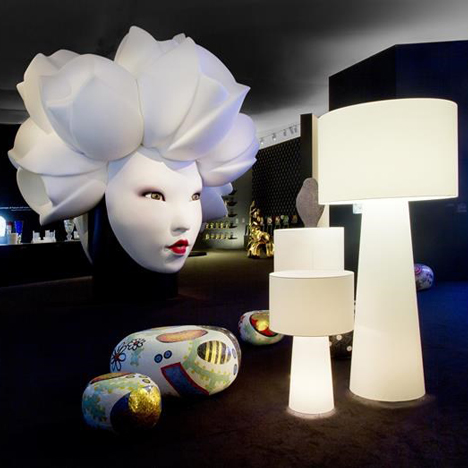 "Museum Boijmans Van Beuningen is one of the best platforms for designers in the Netherlands so it's a great honour to be invited to show a survey of our designs here," Wieki Somers told Dezeen.

Several of Studio Wieki Somers' works are included in the museum's collection and in 2008 the designers created a permanent cloakroom for the museum comprising a circular pulley system that hoists visitors' belongings up to the ceiling of the foyer.

The studio is known for creating fantastical versions of familiar objects through the unusual application of materials and manufacturing processes. One of its most recognisable works is the HighTeaPot, designed in 2003, which combines a porcelain teapot in the shape of a pig's skull with a tea cosy made from the fur of a water rat.

Among the pieces on show at the museum are a series of objects encased in resin to give the impression that they are covered with ice, and a machine created for the Vitra Design Museum that shaves precise slivers from a patterned chocolate cylinder.

"The exhibition offers a glimpse into the imaginative world of everyday objects that we created in the past years," explained Somers. "We observe ordinary situations and customs, how people relate to things and the associations things have for people, and then we let our imaginations run free. We make the ordinary extraordinary in a subtle way."

Other pieces on display include a woven carbon-fibre lamp designed for Galerie Kreo in Paris and a series of chimney pots created for a housing development in the town of Hoofddorp, which are based on chimneys found on English buildings from the Tudor period.

At the centre of the main exhibition space is a display of the Mitate lamps, which were designed following a trip to Japan and incorporate references to flags used to identify different clans of Samurai warriors.

The lamps are separated by fabric panels produced with support from textile firm Kvadrat, which are suspended from the ceiling and stitched together using different embroidered patterns to enclose wooden strips arranged in striped patterns.

"The panels create a serene atmosphere and function as dividers," said Somers. "We designed different patterns referring to the lamps and playing with the light."

Each of the exhibits is inherently different due to the varying references used as inspiration, but have been grouped to emphasise a consistency in the studio's approach to exploring everyday materials and rituals.

"The inherent qualities of particular materials contribute to the meaning of our works but we also believe that associations and historical references have their place in the contemporary everyday," added Somers. "Collective memories play an important role in how people relate to objects."

A book detailing the studio's research themes and design approach has been published by JRP Ringier to coincide with the exhibition, which runs until 11 January 2015.