The 1955 Munkegaard chair, also known as the Mosquito chair, was originally designed for the school located in Gentofte – just north of Copenhagen – which completed in 1957 and was listed in 1995. 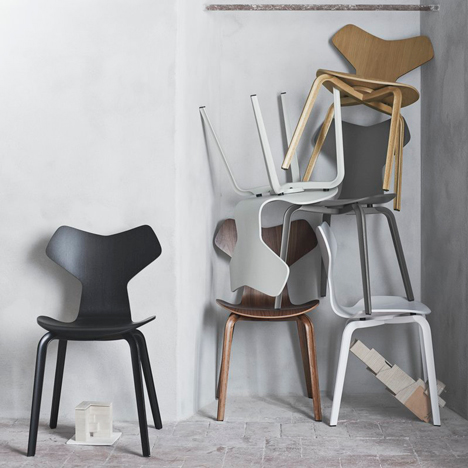 Shaped and built in a similar way to Jacobsen's famous Ant chair, the design features a single piece of curved plywood that forms the seat and back with a metal frame that comes in chrome or powder-coated black or white.

Howe has updated the design so the wooden seat can be easily disconnected from its frame for easier recycling.

"We've brought a 1950s classic up-to-date, making it greener and tougher than ever before, and making it what is today: a new classic for the 21st century," said Howe sales and marketing manager Lars Bruntse.

The launch at the Orgatec trade fair in Cologne last month follows Howe's reissue of Jacobsen's Tongue chair – designed for the same school – in 2013.

"The successful introduction of the Tongue chair in the spring of 2013 gave us the opportunity for relaunching another Arne Jacobsen classic and we are excited as we see a big sale potential in this chair," said Bruntse.

Starting in December, Howe will begin selling the Munkegaard chair in oak, ash and walnut veneer as well as stained veneer in black, white, grey, blue, red and coral.

Versions with a fixed upholstered seat pad or fully upholstered in both fabric and leather will also be available.

This is the latest in a series of relaunches of Jacobsen's designs, including the 1958 Drop Chair created for his SAS Royal Hotel in Copenhagen – which had one its rooms revamped by Spanish designer Jaime Hayón last month.

To put the chairs back into production, Howe worked with the designer's grandson, Tobias Jacobsen, who presides over the Arne Jacobsen Foundation. The brand acquired the rights to both the Tongue and Munkegaard through royalties agreements.

Other Modern seating designs that have recently gone back into production include Lina Bo Bardi's Bowl chair and Hans Wegner's CH88 chair.