News: Dutch studios Powerhouse Company and De Zwarte Hond have won a competition to redesign the railway station in Assen, north-east Netherlands, with plans for a structure with a triangular latticed roof.

Powerhouse Company and De Zwarte Hond, collectively known as Team A, were selected ahead of four other firms to create the new transport hub, expected to reestablish lost connections between the east and west sides of the Dutch city.

The brief – from Dutch rail companies NS and ProRail, and local authorities – was for a new town gateway that will be "inviting, recognisable and accessible". 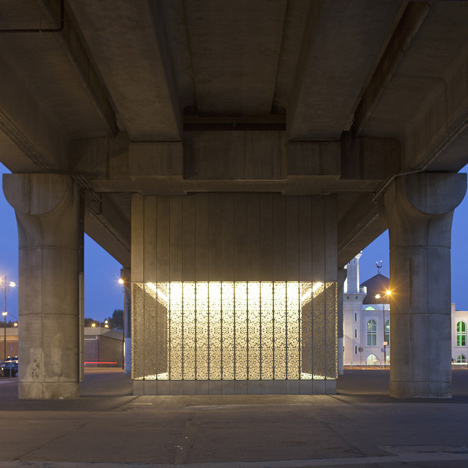 The architects' response was a proposal for a laminated timber canopy that will encompass and shelter all of the station's functions, including a generous concourse, an underground bicycle parking area and three railway platforms.

"This gesture plays a pivotal role in not only creating a strong and coherent identity for the project, but also in plugging into a wider urban landscape by which pedestrians and cyclists can pleasantly traverse the three-track railway to the city centre," said Powerhouse Company in a statement.

The latticed roof will be infilled with glazing to allow natural light into the hall and over the platforms. Each corner of the triangle will mark a different entrance to the building.

The station concourse will run along the western side of the site, featuring a convenience store, a florist and a bus driver staff room, while a subterranean tunnel will offer direct access to the platforms from both sides of the building.

This tunnel will also lead through to the 2,600-bay bicycle parking area, which in turn will connect with an existing cycle tunnel running east to west.

The roof surface will also feature a layer of sedum, which the architects believe will camouflage it amongst the city's existing parks and green spaces.

Recycled components from the existing station will also be used to create three new platform shelters.

The competition jury described the project as "a compelling and exciting interpretation of the brief".

"The design creates a clear and efficient transport hub. The striking building will give the area a new identity and ensure that it is pleasant to be in the station area. The reality will be a warm, welcoming and contemporary arrival point to the city," they said.