Launched to coincide with the Australian Open tennis tournament that is currently taking place in Melbourne, the floating court was created to promote Adidas' latest range of apparel, which incorporates recycled plastic.

The colourful range of clothing is the latest collaboration between the brand and Parley for the Oceans.

It was debuted on the floating tennis court, which was placed in the Great Barrier Reef – the world's largest coral reef system – to draw attention to the wider issue of plastic waste.

"The new adidas tennis apparel collection, that will be worn by players during the Australian Open in Melbourne, has been inspired by the beauty of the Great Barrier Reef and consists of products from one of our sustainability innovators, Made with Parley Ocean Plastic," said an Adidas spokesperson.

"We have chosen to launch this collection in the heritage-protected Queensland marine park to raise awareness and positive discussion around how we can help end plastic waste and protect the Great Barrier Reef."

Adidas worked with the Great Barrier Reef Marine Park Authority to assemble the floating tennis court on one of the marine authority's barges.

To mark the launch, Australian sportstars simmer Ian Thorpe, canoeist Jess Fox and rugby league player Nathan Cleary, along with model Steph Claire Smith, played a game of mixed doubles on the court. Adidas stated that all balls were retrieved from the water.

Following the Australian Open, the surface of the tennis court will be recycled into a sports court that is set to be built at a school in the nearby city of Townsville. 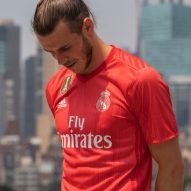 According to Adidas, its latest tennis collection forms part of its drive to remove plastics from its apparel.

"To achieve these goals, we foster open-source partnerships and put a high value on collaboration over competition to create sustainable solutions that go beyond our own business and influence."

Parley for the Oceans founder Cyrill Gutsch hopes that the uniqueness of the floating tennis court will draw attention to the issue of plastic pollution in the world's oceans.

"Plastic created an ecological crisis that impacts all life, including ours, said Parley for the Oceans founder Cyrill Gutsch.

"Yet it's human nature to adapt. We get used to even the most horrible things," he told Dezeen.

"They become irrelevant unless we relate to them on a personal level. That's why we need these moments where we poke through the bubble of ignorance and get everyone's attention," he continued.

"Doing so in a positive and graphic way helps us reconnect to the most important mission that is so deeply programmed into our genes: our own survival. We need to end the destruction of our oceans because we need them to live on this blue planet."

Adidas and Parley for the Oceans have previously collaborated to create running shoes and classic 1990s trainers from recycled plastic.

They have also combined to make recycled plastic football shirts for Real Madrid and Manchester United, as well as hiking boots.