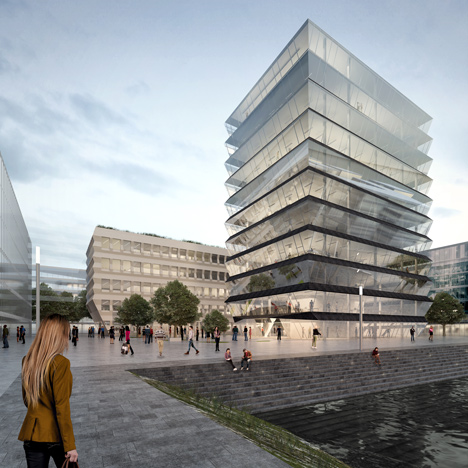 A colourful mural by artists Arno Coenen and Iris Roskam lines the one-hectare surface beneath the arch. Printed onto perforated aluminium panels, it displays images of flowers and insects derived from 17th century Dutch paintings.

MVRDV founder Winy Maas, whose designs also include a shop and office complex disguised as an old farmhouse, told Dezeen the shape was developed because he thought the scheme proposed by the developer was "boring".

Since opening, the building has been met with mixed reviews. CNN reporter Barry Neild said the building looks like "a portal to another dimension crafted from alien technology to bridge yawning chasms across time and space".

"It squats like a chubby elephantine creature, lined with windows and balconies along its 120 metre-long flanks, terminating in a gaping portal towards the square like Milan's galleria, opening up to suck you into its psychedelic tunnel," he wrote.

One of the most favourable reviews came from Dave LeBlanc from The Globe and Mail in Canada – he called the market hall "one of the most breathtaking food markets you’ll ever explore".

"This is a piece of architecture that will quickly become a landmark for locals and visitors alike," he said.

Markthal Rotterdam is located in the centre of Rotterdam. Read more about it in our earlier story, or watch our interview with Winy Maas.

See more photography by Hufton + Crow on their website.