Comoco Architects has added a third new structure to the grounds of the medieval Pombal Castle in Portugal – a limestone-clad visitor centre that doubles as a viewing platform (+ slideshow).

The single-storey structure with a staircase forming one of its facades is the second commission that Coimbra-based Comoco Architects has had for the Romanesque fortress, following a weathered steel cafe and a wooden gazebo completed on the castle hill in 2012. 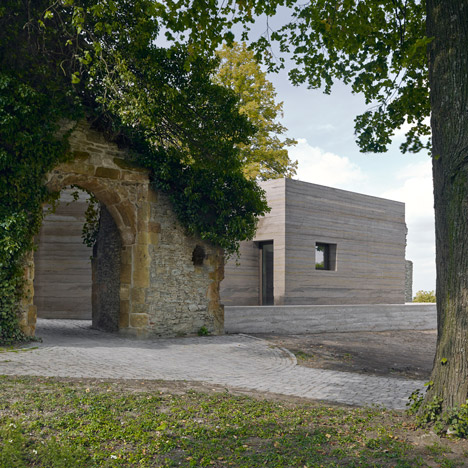 This latest project is located within the castle's perimeter. It runs alongside one of the historic stone walls, offering information for visitors and a new viewpoint through the 16th-century Manuelino-style windows.

"Our design strategy for Pombal Castle's visitor centre pursues a deliberate ambiguous condition between a topographical feature, a limestone monolith, and an amiable wanderer, a stranger in search of a welcoming new home to rest," explained architects Luís Miguel Correia, Nelson Mota and Susana Constantino.

"The main challenge of the commission was the definition of a design strategy that could live up to the richness of the castle's multi-layered history without being either ostensive or subdued, i.e. finding its voice among the very many built artefacts that populate that space."

The brief was to create a guest reception, a storage area and a room to screen a virtual history of the castle. The architects chose to expand this programme to include the new observation deck.

"We thought of the new volume as an object that should embody some ambiguity," said the team, which has previously designed a visitor centre for another Portuguese castle.

"On the one hand it should seamlessly mingle with the exiting features in the castle's ward, and on the other hand it should become a conspicuous new addition to the existing built structures. In other words, we sought for a creative dialogue with the situation as found," they added.

The staircase ascends slowly up the building's south-east elevation, offering access to the entire rooftop. The space is surrounded by a thin metal railing that is barely noticeable.

A triangular recess in the facade houses the entrance. Inside, the projection room sits on the right-hand side and the storage area is tucked under the stairs.

The final intervention was to upgrade the surrounding landscaping by repairing the limestone cobbled pathways.