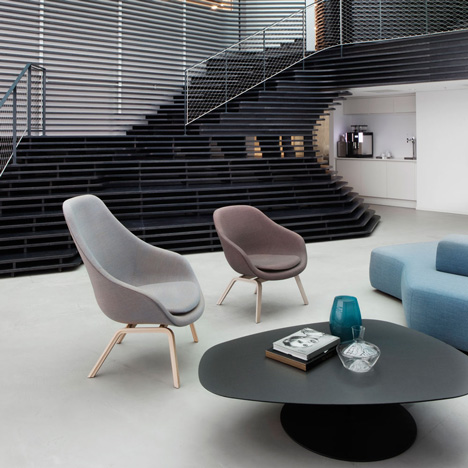 During the last century the interior of the wedge-shaped property, which occupies a corner plot on Phipp Street in Hackney, had been partitioned into uneconomic office spaces.

The architects peeled back the layers of plasterboard, carpet and suspended ceilings to expose original wooden flooring, brickwork and iron columns across the first and second floors of the building.

"The building-regulation-compliant partitions, walls, ceilings and floors had not only reduced the usable floor area but removed the inherent quality and character of the structure," Taha told Dezeen.

"We revealed the original robust structure that used only three elements – brick, iron and timber – allowing these to express the architecture."

Two new oak staircases were inserted – the first to connect all of the floors, and the second to form an additional connection between the first and second levels, which could be rented as a single unit but are currently still separate.

"This allows future flexibility between the first and second floors should one tenant take both spaces, the building’s common and shared staircases are treated as independent objects penetrating and linking one floor at a time," said Taha.

The communal flight that connects all the floors is completely enclosed in a zigzagging form, with the other surfaces following the line created by the treads. It can be seen from the street winding its way up through the floors of the building through the large sash windows.

Slim recessed handrails in the wooden walls of the stairwell are illuminated with yellow lights.

This is the first phase in a series of renovations being made to the building, which will later include the refurbishment of the ground and basement levels and a rooftop extension, once existing tenants have vacated.

Inside the completed spaces, the original red brickwork and wooden floors have been revealed and clusters of grey-painted iron columns support the newly exposed timber ceilings.

Glazed doors added to each floor have treated steel frames that tone with the original window fittings and columns.

Toilets are encased in large cubes constructed in the same oak used for the staircases.