Shortlisted for the 2009 Design of the Year award, the Senz umbrella was designed with an asymmetrical canopy to keeps the user dry from head to toe. 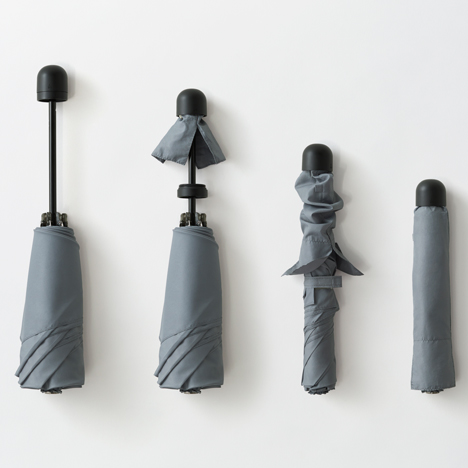 The canopy can withstand winds up to 70 miles per hour and has specially shaped "eye savers" on the ends of the spokes to protect passersby.

Senz is now combining its patented technology with work by fashion and textile designers for a new line called Senz6.

For the first in a series of biannual collaborations with different designers, Yoske Nishiumi has created the Monsoon collection.

"But for us, an umbrella isn't just something practical, it's also a style accessory, so we decided to create this new line of fashion umbrellas, Senz6."

According to the team behind Senz, over 1.1 billion umbrellas break and are discarded every year. Their device seeks to counter the amount of waste caused by the traditionally flimsy design of compact folding umbrellas using an aerodynamic shape that can withstand high winds making it less likely to break.

"Where a traditional umbrella quickly turns inside out in the wind, the asymmetric shape of the Senz6 umbrella ensures it balances itself, finding its best position in the wind," explained Hess. "Even in strong winds, the umbrella can be held with just two fingers."

The new models come in automatic and manual opening versions, with canopies in a range of colours and patterns including block tones, dots and dazzle camouflage – a mix-match of black and white stripes first used to disguise ships during the First World War.

Other unusual umbrella designs recently featured on Dezeen include an origami-like structure that can bounce back into shape after being blown inside out and a small folding device with a cover that can be housed in the handle.