American designers Justin Nagelberg and Matthew Waldman have reimagined the umbrella, replacing the traditional metal-framed canopy with a flexible structure that folds like origami.

Justin Nagelberg and Matthew Waldman's Sa umbrella removes all exposed moving components that bend and break easily in high winds, and is instead formed from folded plastic panels. 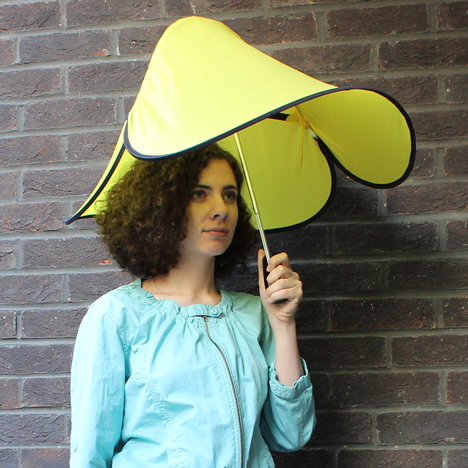 Drop umbrella by Ayca Dundar is made of just six parts

"The Sa is the umbrella reimagined," said Nagelberg. "It does away with the traditional skeleton and mesh umbrella structure, for a much more modern and efficient design."

The redesigned canopy uses planar tension to keep its shape, much like the Japanese paper-folding technique of origami.

Two circular sheets of lightweight plastic – a larger outer canopy and a smaller inner layer – are folded in a way that allows them to expand and contract simultaneously to open and close the umbrella.

"Since the material is flexible when not in tension, it can easily bounce back into shape, even when exposed to high winds," Nagelberg explained.

This removes the need for the metal skeleton found on standard umbrellas, making the design lighter and creating more head room beneath the protective shield.

Six ridges along the folds are reinforced to keep the canopy stiff. The material is flexible enough that it can return to its original shape after being blown inside out in high winds, without compromising the structure.

"We have designed the panels in such a way so that the very tips of the umbrella are less pointy, and therefore will be safer to walk around with," said Nagelberg.

The open and close mechanism is incorporated into the handle. Turning the knob on one end activates a spring-loaded mechanism to open the canopy, which is then closed by pulling the same component that automatically retracts as the panels concertina inward.

The designers claim the product is "the first umbrella to use an internalised mechanism".

"This is possible because the distance between the open and closed positions on the Sa can be shorter than with traditional umbrellas," Nagelberg said.

Magnets embedded into the perimeter of the cover snap together to keep the material compact when folded away. The magnets release once the upward pressure forces the umbrella open.

The duo named the design "Sa" after a combination of the Japanese words "kasa", which means umbrella, "same", a word for rain, and "sasu", the verb used to describe holding an umbrella.

Available in cyan, yellow, magenta, black, grey and white, parts of the umbrella can be swapped and replaced so users can mix and match the colours.

The Sa umbrella has more than tripled its $30,000 (£20,000) target on crowdfunding website Kickstarter, with 25 to go until the campaign ends.