Clio Capeille's Nighttime Depends On Us project imagines a new kind of built landscape suited entirely to darkness, designed as a reaction against the 24-hour city culture that keeps many urban spaces brightly illuminated after hours. 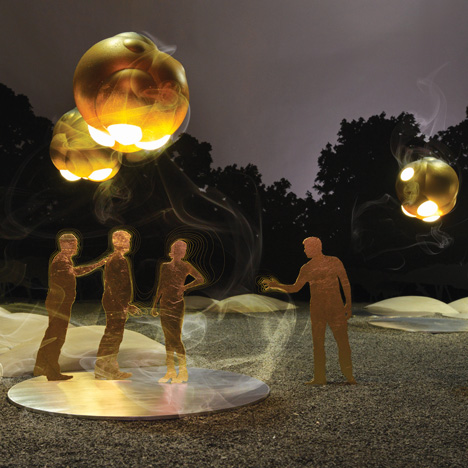 "Stressed under tension between economical intensification and progressive erosion, nighttime has become an endangered species," said the designer, who graduated from the Royal College of Art in 2013.

"These tendencies are shaping a future 24-hour non-stop city, drawing no difference between night and day," she said.

Working with a site on the fringe of London's Olympic Park, Capeille proposes a series of conceptual buildings designed to encourage people to adjust their routines, using hours they would usually spend asleep exploring one of the darkest parts of the city.

The first is a "pre-reverie observatory" that visitors could climb up to survey the nighttime landscape.

There's also a horizontal chamber to facilitate the transition from light to dark, a "nycto-therapy" centre to treat the human biological tolerance of real darkness, and a cinema where natural blackness is used to trigger viewers' imaginations.

"Using darkness as a material, the night-imagined buildings stimulate and amplify the human psychological and physiological estates of the twilight condition, the interim period between waking and sleeping," said Capeille.

These structures would be accompanied by night-blooming flowers such as Ipomoea alba (moonflower) and Datura inoxia (thorn-apple), which would define the borders of the nighttime territory.

Capeille has also designed a kit of tools to help people experience the darkness, including a glove for unscrewing light bulbs, a set of headphones that isolate night sounds, a pair light-extracting goggles and a notebook with black carbon pages for "blind sketching".

The project is on show at the Galata Greek Primary School for the Istanbul Design Biennial 2014, which continues until 14 December. It is presented in a dark room, so visitors need to use torches to find their way around.