Part of the Ephemerā installation at the Design Miami fair this week, the oak tabletop sprouts a variety of two-dimensional forms representing plants and insects when nobody is near. These elements withdraw into the table or flatten themselves against its top when people approach. 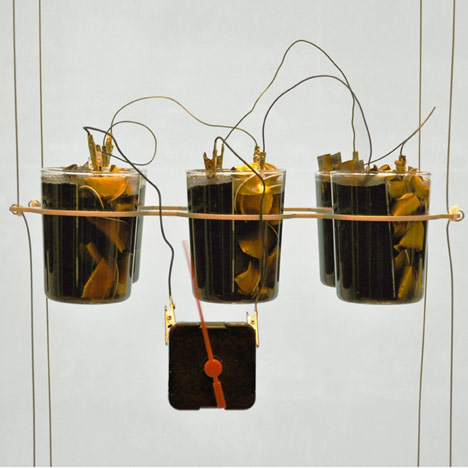 "It's a table made of oak and on top there are water jet-cut metal elements resting in a laser-cut surface," said Mischer'Traxler's Katharina Mischer. "Each of the elements is connected to a motor hidden beneath the table top. Around the table there are ultrasonic sensors that detect when people get too close and the elements on the table top become flat."

The installation also includes two mirrors that feature similar botanical forms on their perimeter and across their surface. These too vanish when movement is detected nearby, turning them from decorative pieces to functional mirrors.

"It's an interactive kinetic installation," said Thomas Traxler. "If you are at a big enough distance from the table it starts blooming, and the same with the mirrors. They become very decorative pieces. But if you come too close the table becomes flat and the mirrors become functional mirrors."

Perrier-Jouët asked the designers to interpret its Champagnes and Art Nouveau – with which the brand is associated – for the installation, which is the first in a series of projects Mischer'Traxler will work on for the Champagne house over the coming year.

"It's playing on the theme of Art Nouveau," said Mischer. "We tried to capture this moment you have with nature sometimes when you go too close and it hides."

"Champagne is always a moment of celebration that you enjoy but it's always melancholic as well, because you know the moment is going to end, although you have the hope that the moment will come again," said Traxler. "So we wanted to play on this moment."

"The species that are used on the table and on the mirror area all related to real species," he added. "Some are extinct and some are very common plants that can be found all over the planet, while others are newly discovered species. So it's also about the impact of humanity on nature, and the impact we have."

This is the third year in succession that Perrier-Jouët has collaborated with emerging designers at Design Miami. Last year, Simon Heijdens created a series of suspended glass vessels called Phare No.1-9, while in 2012 Glithero produced Lost Time, an installation featuring loops of glass beads.

Mischer and Traxler graduated from Design Academy Eindhoven in 2008 and have since worked on a series of acclaimed projects including machines that build baskets out of veneer and a device that turns sunlight into furniture.