Criss-crossing concrete beams brace the excavated walls of two new stations that have been added to the metro network in Budapest by local studio Spora Architects.

The stations developed by Spora Architects are among ten that will be added along the Hungarian city's new 7.34-kilometre M4 metro line, which connects the city's South-Buda district with the centre of Pest on the opposite side of the Danube river. 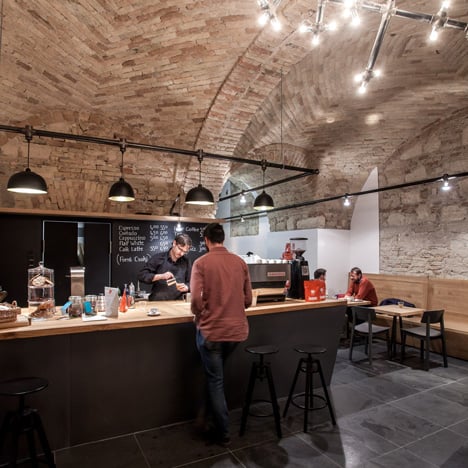 First conceived in the 1970s and developed over the subsequent decades, the plans for the M4 stations have been updated to reflect contemporary requirements and aesthetic standards.

"The most challenging aim for us was to rationalise the structures, architecture, technology and space as originally planned, while at the same time re-thinking the project according to the 21st century's spirit," explained the architects in a statement.

The stations at Szent Gellért tér and Fővám tér are situated on opposing banks of the Danube and are the deepest on the line.

Both stations employed a "cut-and-cover" construction method in which the spaces were excavated from top-to-bottom rather than mined, allowing the architects to introduce daylight from the surface into the deepest levels.

The system of cross-bracing reinforced concrete beams reduces the need for columns, enabling the platform areas to become open and uninterrupted spaces.

It also provides a distinctive visual feature that unites the "twin stations" and is used across the different levels.

In a film produced to describe the design process, architect Tibor Dékány explained that the structure was based on the growth of bone tissue, which "is known to be denser and stronger where the most weight is carried."

The above-ground and underground spaces at the Fővám tér are designed to accommodate an interchange for the metro, trams, buses, boats, cars and pedestrians, with the interior carved up into a series of expansive halls.

Here, the complex system of beams evokes the streets and traffic systems above ground.

"It reflects the experience of urban traffic," added Dékány. "Zigzagging from here to there, junctions, crossroads and forks everywhere."

Crystal-shaped skylights at ground level supplement the artificial lighting, which creates an interplay of light and shadow within the cavernous interior as light is projected onto the overhead beams.

In places where passengers interact more with the interiors, the architects chose materials that give the surfaces a sense of tactility or visual interest.

The entrance and circulation areas of both stations feature weathered steel panels that have been applied to the walls, designed to offer a warm contrast to the concrete surfaces.

Tunnels within the Szent Gellért tér station are decorated with a swirling mosaic by artist Tamás Komoróczky, which references the tiles used inside the famous Gellért hotel situated nearby.