Dezeen and MINI Frontiers: engineering student Martijn Lammers, part of the team behind the world's "first solar-powered family car," claims most vehicles could be powered by the sun in future.

It won't be long before "people have a solar car on their driveway," Lammers says in the movie, which was filmed in Eindhoven at Dutch Design Week 2014.

"There's so much energy from the sun that's not being used," he explains. "It's still quite expensive to build [a solar-powered car], but within about 30 years solar cars could be a realistic way of transportation."

Lammers is part of Solar Team Eindhoven, a group of students from Eindhoven University of Technology who designed and built a four-seated solar car and raced it across Australia from Darwin to Adelaide. 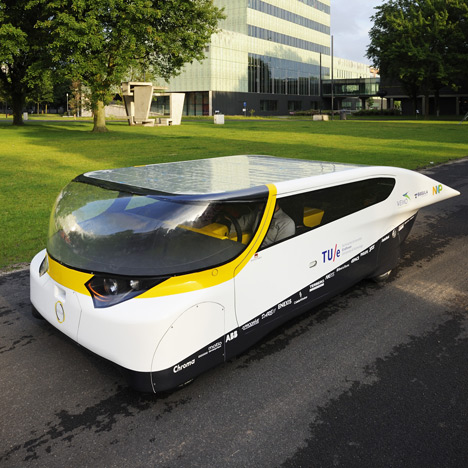 "In 2013 we joined the World Solar Challenge with a practical car we call Stella," Lammers explains. "It's the first solar-powered family car."

Stella won the race in the cruiser class, a category reserved for practical vehicles rather than race cars.

"[Stella] is very much like a normal car," says Lammers. "It can reach up to 120 kilometres an hour. In good sun conditions and with the battery charged it can travel for about 700 kilometres. It fits four people. It's a car you can just get in and drive away like the car you own at home."

Participants in the race were only allowed to charge their vehicles from the grid once, with the rest of the energy for the 3,000 kilometre journey coming from the sun.

Lammer's claims that even in less sunny parts of the world, a solar-powered car like Stella would be practical to own and drive.

"Stella can charge while it's driving but also while it's standing still," he says. "In a climate like in northern Europe you'd collect more energy than you'd use in a normal daily commute for ten of the twelve months in the year."

He continues: "That means it's energy positive and it could feed energy back to your home. You could use your washing machine with the power you gathered with your car."