Architect Fernando Menis has developed a concept for a residential tower complex with rock-like walls, a cavernous swimming pool and plants growing out of every crevice.

Proposed for a site in Taipei, Taiwan, Agora Garden was designed by Tenerife-based Fernando Menis as a way to bring nature back into the city, by combining it with domestic environments. 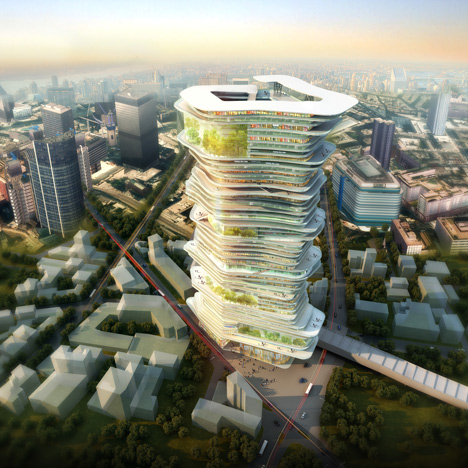 Conceptual skyscraper designed for London could house its own metropolis

"This housing project is conceived as a fusion between the nature in the vicinity of the land and the primitive rocks emerging from the ground," said Menis, whose past projects include a church built with volcanic stone.

"As if they had always been there, the two elements of the building create a timeless symbiosis, where volumes and vegetation embrace each other to generate the volume that houses the spacious flats," he explained.

The proposal comprises a cluster of connected towers that extend up to 25 storeys in height. Within these, Menis has designed four different apartment types, with areas of 250, 550, 750 and 1,000 square metres.

The organic concrete form of the building's exterior continue through the design of these interior spaces to create cave-like living rooms. A vehicle elevator would also allow residents to park cars inside their homes.

Against a backdrop of hanging gardens, social spaces dotted through the building would encourage residents to interact. A club, an indoor swimming pool and relaxation area would also be included on the upper levels.

"The floors are very versatile, adapting to different customer profiles that might inhabit it," said Menis.

"In the lower part of the project, nature is more present, clambering among the rocks to reach its presence in the set; as ascending, the rocks emerge from nature, leaving the latter inside and which tries to escape the space enclosed by the rocks, always looking for natural light," he added.

The project was developed in 2010 as a competition entry. The contest was won by Belgian architect Vincent Callebaut, whose proposal is currently under construction in the city.