A skyscraper that processes waste, an ice dam, an urban nature reserve and a border-wall building are among the conceptual projects recognised in this year's eVolo Skyscraper Competition.

His proposal aims to deal with the vast amount of waste generated in cities, which often ends up in landfill sites, while taking up very little space.

Waste would be delivered to the skyscraper and sorted as at a standard recycling centre. The organic matter, including wood and paper, would be placed in modular containers and craned into position on the skyscraper's concrete core.

Second prize was awarded to Polish architects Klaudia Gołaszewska and Marek Grodzicki, with their concept for a supertall skyscraper that would clean the air of the world's most polluted cities.

Named Airscraper, the 800-metre-tall skyscraper would be built around a 30-metre-wide central tube that acts as a chimney. Polluted air from ground level would be sucked up the chimney and filtered, before being released from the building's roof.

Residential apartments to house 7,500 people would be arranged around the central chimney, along with shops, educational and cultural facilities, and a large garden.

Creature Ark: Biosphere Skyscraper, designed by Zijian Wan, Xiaozhi Qi and Yueya Liu from the University of Liverpool, was awarded third prize. The architecture students propose creating a stacked nature reserve with a central research station at its core. 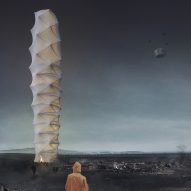 Designed to reflect the climates found at different latitudes and longitudes, the vertical reserve is divided into five stacked levels – polar, continental, temperate, tropical and arid. The entire structure is wrapped in a double skin that would maintain the internal climate on each level.

The team's Ice Dam Skyscraper aims to help preserve the rapidly melting glaciers by building a cooling system into the glacier's base.

An honourable mention was also given to Horizontal City Of No Nation – a skyscraper that would be built along the border between two nations. The skyscraper, designed by Zhichen Gong, Yong Chen, Tianrong Wu, Yingzhi Hem and Congying He from China, would contain shelter and security for refugees.

The eVolo Skyscraper Competition is a contest run annually by architecture and design journal eVolo.

Last year's competition was won by a collapsable skyscraper that could be quickly deployed in disaster zones, while the 2017 award was won by a proposal for a modular vertical farm that could be assembled at various  locations across sub-Saharan Africa.